Bitcoin ATMs are popping up across the U.S. as Bitcoin adoption grows. The machines provide a convenient, hassle-free experience for anyone to purchase bitcoin, meeting the growing demand across the country – with some tradeoffs.

In less than a year, bitcoin ATM units deployed in the U.S. have more than doubled, now amounting to over 38,000 machines, according to How Many Bitcoin ATMs, an independent research site.

The total number of bitcoin ATMs in the U.S. by an operator per month. Source.

In West Texas, bitcoin ATMs have popped up at gas stations and grocery stores, reported CBS7. The machines allow customers to walk in and trade cash for BTC, up to $18,000. And the machines also bring in business, a store owner said in the report, because customers often end up buying other products at the store.

The company operating these machines in West Texas, Quad Coin, told CBS7 that the simplicity of the purchasing process has ramped up demand, leading the company to sketch expansion plans.

Quad Coin founder Mark Shoiket said he founded the company after he “assumed there was demand and people wanted bitcoin everywhere,” reported Reuters in March. He got that right. According to the report, ATMs’ ease of use leads people to make a quick stop and buy bitcoin anytime.

Eyeing the growing demand and based on successful deployment examples, convenience store chain Circle K announced yesterday that it had partnered with bitcoin ATM company Bitcoin Depot. The collaboration will bring bitcoin ATMs to Circle K stores in the U.S. and Canada, and over 700 machines have already been installed. 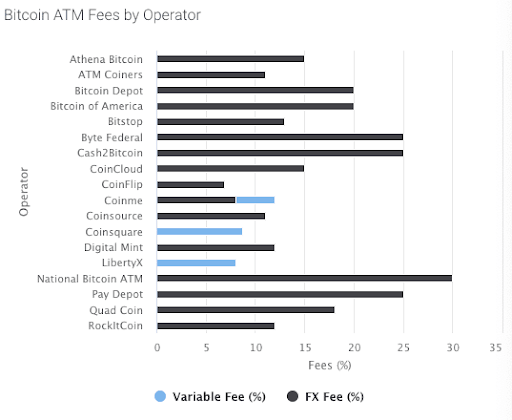 How much does each ATM operator charge in fees for bitcoin purchases? Source.

Bitcoin, which prides itself on free-market structures, game theory, and economic incentives, wins by as many different purchasing options there are in the market. A peer-to-peer market provides an opportunity for privacy-conscious individuals, for instance, while a regulated exchange can offer greater ease of use for online buyers. And different alternatives, given that they encourage self-custody, are what likely will drive adoption further.

Recently Bitcoin.com News covered the stablecoin tether and how the crypto asset’s market valuation jumped more than 1,500% in...

Bitcoin Is An Astonishing Instrument For Change

I see bitcoin as an astonishing instrument. The more you pour yourself into it, the more of yourself comes...

Bitcoin And The Myth That Is Capitalism

Throughout history, there has been a cyclical phenomenon characterized by Neill Howe and William Strauss as the four turnings.1...

Binance, the leading cryptocurrency exchange, has announced it is preparing changes to be able to work with regulators more...