The below is a direct excerpt of Marty’s Bent Issue #1124: “Approaching hashrate all time highs.” Sign up for the newsletter here. 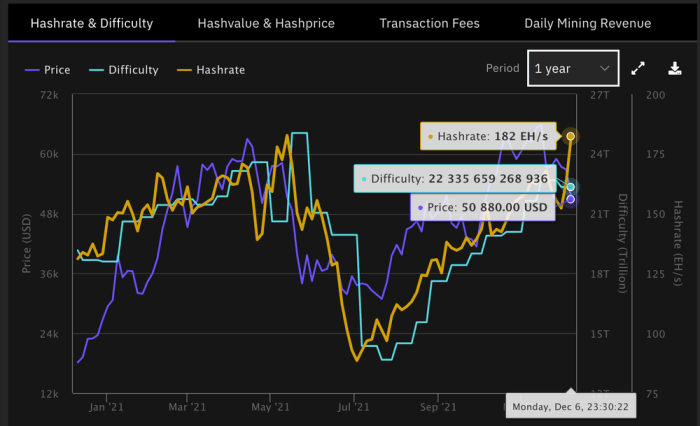 If the recent trend in Bitcoin network hashrate growth continues pace, we should see new all time highs by the end of the year. This is an incredible development when you take the CCP’s ban on all mining operations within China in May of this year. At the time of the ban many, myself included, surmised that hashrate wouldn’t fully recover until well into 2022. I am happy to report that it seems that many of us were wrong. The Bitcoin network has proven to be extremely robust and dynamic.

Economic incentives are one hell of a drug. The pace at which the economic actors within the mining industry moved to unplug, pack, ship, and plug in miners is extremely impressive. Of course the recovery was aided by new deliveries hitting the market as well, but the global coordination to find the ASICs that were forced to leave China new homes cannot be overstated. A dormant miner is a physical option of future block rewards that isn’t being taken advantage of. Every block a miner misses is sats left on the table and extends the expected return of capital. With this in mind, operators worked day and night to find electricity and rack space to get those options back up and producing. In the process, helping get network security back to a place where it is much harder to attack the network.

As of right now, we are due for an upwards difficulty adjustment of 6.2% in 693 blocks.

If hash rate remains static between now and the next adjustment (it won’t but please appease my thought experiment) difficulty will hit 23,720,470,143,610, which would be 5.2% away from the difficulty all time high set in May. It wouldn’t be surprising to see a new all time high before the new year. This will be something to keep an eye on in the coming weeks.

Bitcoin is so damn beautiful. One of the most powerful despotic regimes in the world tried to deal a major blow to the network and it barely flinched. This is very very very bullish and it hasn’t been appreciated by the market yet.

Bitcoin price this week touched $34,000 per coin, sending chills down the spines of once bullish crypto investors. But...

Ken Kutaragi, father of the Sony Playstation, has issued his opinion about the metaverse narrative currently developing on the...

The below is a direct excerpt of Marty's Bent Issue #1150: "The path to peace and prosperity." Sign up...

Bukele’s El Salvador 23% Down On Bitcoin Investments Less Than A Year Since Adoption | Bitcoinist.com

El Salvador’s bitcoin experiment has been ongoing for less than a year. Things aren’t going as smoothly as the...