Bitcoin has been struck by the bears for its third consecutive week. At the time of writing, BTC has lost two critical support zones at $35,000 and $32,000. The first cryptocurrency by market cap trades at $31,987 with a 10.5% correction in the daily chart.

Bear market is defined as a decreasing set of prices for various types of assets. A bearish investor wants to profit from the movement of dropping prices. You can think of a bear, swinging his big paw downward on the investment, crushing prices.

The general sentiment in the market seems bearish, as BTC failed to gain a strong foothold on the high area around current levels. A report by Arcane Research concluded the recent correction follows a week with low exchange activity, a dropped in on-chain activity, and “futures premiums have almost gone”.

The research estimates that on-chain activity has descended by around 69% since the beginning of May and the end of April. As consequence, BTC network fees also declined by almost 93%, as seen in the chart below. 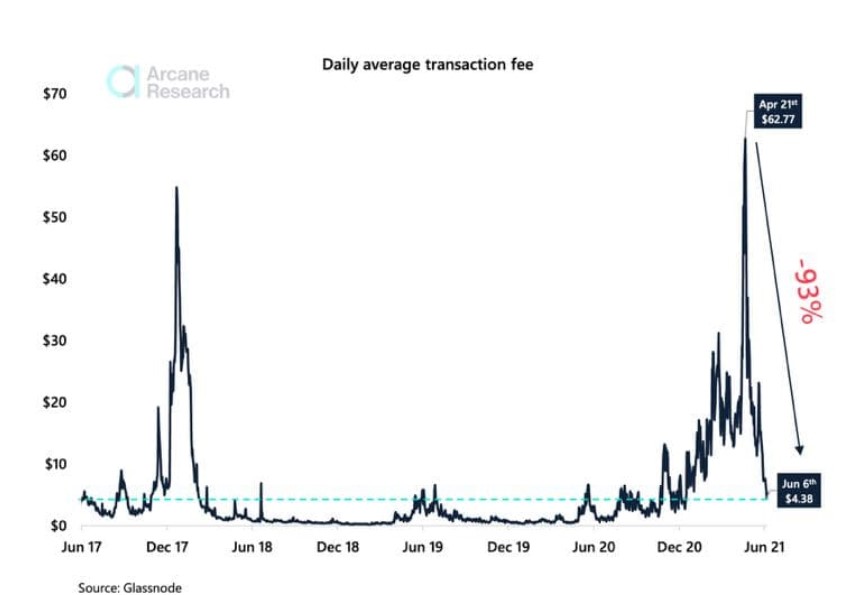 The average daily transaction on Bitcoin’s network has gone from $62 in April to $4.38 at the beginning of June. At the same time, the 7-day average mempool transaction has reached its lowest levels since April 2020, as Arcane Research determined.

This has coincided with the mining sector increasing their BTC sales. After China placed new limitations on the sector for certain BTC mining activities at a grand scale, some miners were forced to relocate their operations. Therefore, seems logical that they sold part of their holding to obtain liquidity for expenses.

Lex Moskovski, CIO at Moskovski Capital, said that around 8,545 BTC left miners’ wallets in the last 4 days. The increase in selling pressure has contributed to the recent crash. Where some see fear, mayhem, and disarray, others see a chance to accumulate. Data from Glassnode suggest that the total Bitcoin supply held by long-term holders has been on a rise after reaching a plateau during March 2021. As seen in the chart below, the rise in these metrics went parabolic as of mid-May when BTC’s price took its worst hit. These investors bought more than all the BTC supply sold by short-term investors. Analyst William Clemente believes this number to be around 217,194 BTC. Clemente said:

Further data recorded by Glassnode indicates that 744,000 BTC have been withdrawn from exchange platforms into cold wallets since March 2020, when BTC’s price dropped to $3,000.

During May and part of June 160.700 BTC of this supply has returned to the market. Although an important increase, it only represents 22% of the overall supply that has gone cold. Analyst Checkmate believes this sell-off is a change in conviction by a portion of the market.

The fact that long-term holders have returned to accumulate Bitcoin it’s a bullish sign, but the analyst believes there could be similarities between this behavior and an accumulation period in the 2018 Bear

Bear market is defined as a decreasing set of prices for various types of assets. A bearish investor wants to profit from the movement of dropping prices. You can think of a bear, swinging his big paw downward on the investment, crushing prices.

As seen in the fractal below, after a prologue distribution in early 2021, long-term holders can continue to accumulate while the price moves sideways or trends downwards. The analyst added:

This fractal describes the inflection point where LTHs stop spending, start re-accumulating and hodling what are now considered cheap coins.

In the current digital world, privacy is a truly rare commodity, thanks to the sheer amount of data gathered...

Why China’s Crackdown On Bitcoin May Be Just Beginning

Bitcoin mining activities might be coming to an end as the industry is used to knowing them. The Asian...

The best time to buy Bitcoin was a few years and when it first came around in the early...

Sino Global Capital has been posting reports on Bitcoin, China, and the changes that are taking place within the...