The exciting thing about predicting a Bitcoin future is there is very little direct history to draw on. Everything is new, unpredictable, terrifying, and full of opportunity. Until El Salvador, there were no data points, but perhaps this provides insight into the next country-sized domino to fall.

What internal or external catalysts might be necessary for a country to adopt Bitcoin?

These motivations are spread unevenly amongst the population and government officials. All of these are powerful motivators and perhaps the data to follow can provide insight into the motivations that might spark the next seismic shift in the monetary landscape.

Prior to the data, let’s examine potential adoption styles. The first style is top-down adoption from the government, providing laws to guide the country towards Bitcoin adoption with potentially only modest population support. Hybrid adoption being a moderate population with growing momentum adoption incentivizing the government to begin Bitcoin laws. Finally, bottom-up adoption led by an overwhelming adoption from the population all but forcing the government to fight and to eventually comply. Countries adopting Bitcoin will give their reasons, trends will eventually emerge, and history will show which metrics meant the most.

The government steps in and codifies Bitcoin into law prior to widespread Bitcoin adoption of the population. In my view, this is the least preferred but potentially fastest adoption mechanism. Forced adoption is against the free-market and self-sovereign principles that many Bitcoiners hold. Given enough time El Salvador would have likely been a Hybrid Adoption case (discussed below) as word of Strike App spread and adoption accelerated organically, paired with a forward-thinking government.

However, El Salvador progressed quickly and opted for the Top-Down Approach. El Salvador’s president, Nayib Bukele, provided several reasons to offer up as data points in their top-down adoption – high remittance-based economy, negative migration numbers, dependent on a monetary policy not of their choosing, and unbanked citizens. Each reason is rational and fixing each issue benefits the country as a whole.

These data points will likely be consistent for top-down approaches as governments look to plug the holes of their monetary sinking ships or escape the suffrage of sanctions. I believe this method is susceptible to contagion as world leaders jostle to be viewed as innovative, forward-thinking, visionaries and to risk another world leader gaining the clout of first mover may push forward countries in a similar region towards adoption.

This adoption style is led by enough of the population to incentivize a forward-thinking government to capture the movement and codify Bitcoin into law. By riding the groundswell of adoption early, a government can capture momentum and count Bitcoin’s success as its own. The free markets will have already incentivized adoption, innovation, and education. The government would simply need to take Bitcoin the last 20-30% of the way to a full Bitcoin standard.

Common traits of such a country will likely be higher inflation rates, unstable monetary policy, moderate cellphone penetration, active social media, and lower gross domestic product (GDP) per capita. I foresee this method as being the most likely for the majority of countries as politicians are faced with game theory choices that could be devastating to their political careers.

Such politicians can choose to embrace the younger skewing, innovative, dopamine infused social media engaged, futuristic monetary system and gain favor, or crackdown on Bitcoin adoption and potentially lose their political careers. Political parties will find themselves at odds with the younger generations and face extinction at the ballot box. Additionally, similar to the top-down approach, I believe this adoption method is highly susceptible to contagion as other countries in a similar region signal Bitcoin adoption; it applies pressure upon governments towards monetary progress.

The most preferred method of any free market and self- sovereign individual may end up being potentially the messiest adoption method. Governments unwilling to embrace the hybrid method are likely avoiding codifying Bitcoin into law for specific preservation of power reasons. This can lead to bans, crackdowns, stiff regulations, fines, abuse, and other violations of human rights. The Bitcoin movement will likely continue underground building momentum and entrenchment slowly but surely.

Countries and governments with the most to lose in terms of monetary power, geopolitical influence, and untethered spending budgets will be the most resistant. Free markets will naturally select an open and mathematically based monetary policy but governments will likely attempt to convince the population it is not to their advantage. Social media and cellphone penetration will be key to circumventing misinformation. Free market will converge on Bitcoin, but governments will be faced with the choice to either push for, pull grudgingly, or fight Bitcoin adoption. Countries could be stuck in this adoption method for quite some time.

In light of those three adoption scenarios let’s get to the data at hand. I consolidated data from multiple sources and time periods. Data is of the most recent year available with a mostly-complete data set. As is usual with our community I posted all data sources at the bottom for anyone else to build/update their own data collection. Data can be spotty based on the country’s restriction of transparency or simply being too small.

Here is a link to a shared Google sheet with the data tables. 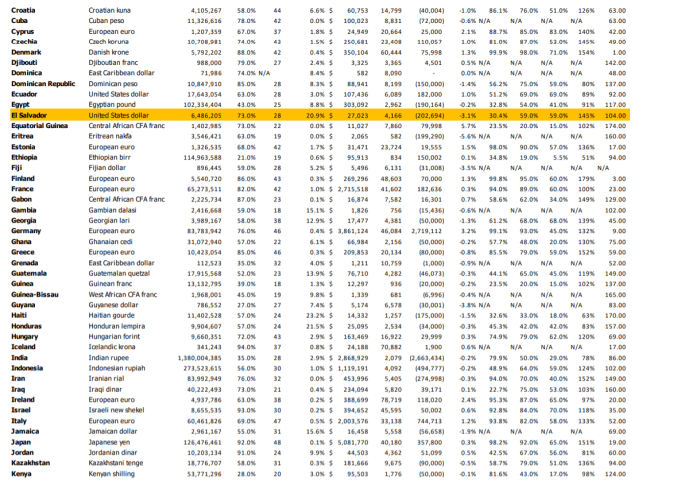 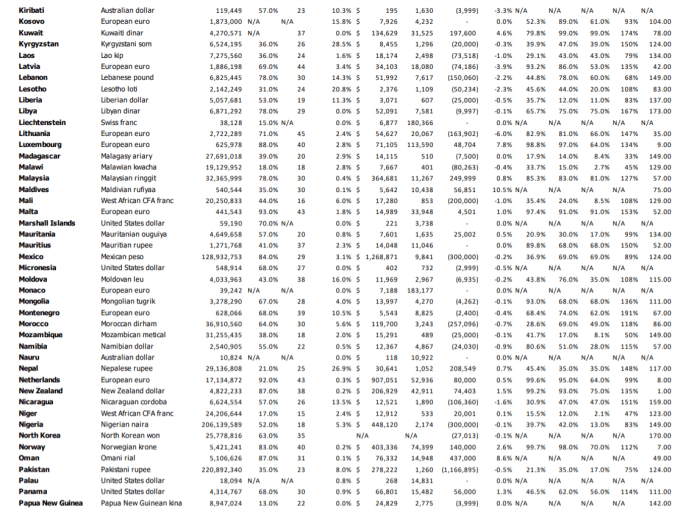 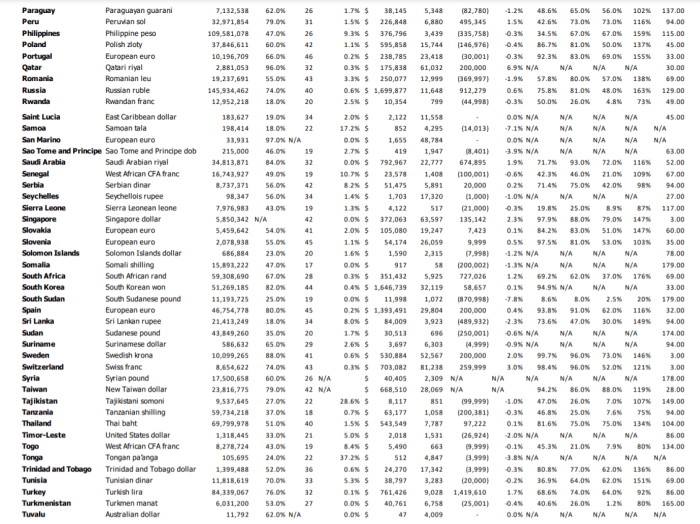 This is a guest post by Bitcoin&Bald. Opinions expressed are entirely their own and do not necessarily reflect those of BTC Inc or Bitcoin Magazine.