The President of El Salvador, Nayib Bukele, has announced Chivo, the country’s official Bitcoin wallet, which will allow Salvadorians to hold both BTC and USD balances as a mobile app. The government will also give a $30 bonus in bitcoin for those who download and register for Chivo after it launches in September.

El Salvador will give this bitcoin bonus for two reasons, according to the announcement.

“First, to promote the use of bitcoin in the economy,” Bukele said. “Second, so that the people have an incentive to use the application and download it, and in this way start the system … so that you can go to a local store and everyone will have bitcoin, because everyone will have the same incentive to have downloaded the app.”

The $30 bonus will be given in bitcoin, based on the market value of the BTC/USD pair at the time of registration. Furthermore, users will be able to hold both USD and BTC balances in Chivo and convert funds between the two balances at any time. Chivo will display the amount held in each balance in both USD and BTC terms.

Additionally, the bitcoin wallet will allow users to make payments and send money with QR codes. But Bukele also stressed that nobody will be obligated to accept BTC. For instance, if a user wishes to pay for their groceries with bitcoin but the merchant wants to receive dollars instead, Chivo will allow for both to use their preferred currency. The user can send BTC, and the wallet will convert and deliver the corresponding USD amount to the merchant, based on the bitcoin spot market price. 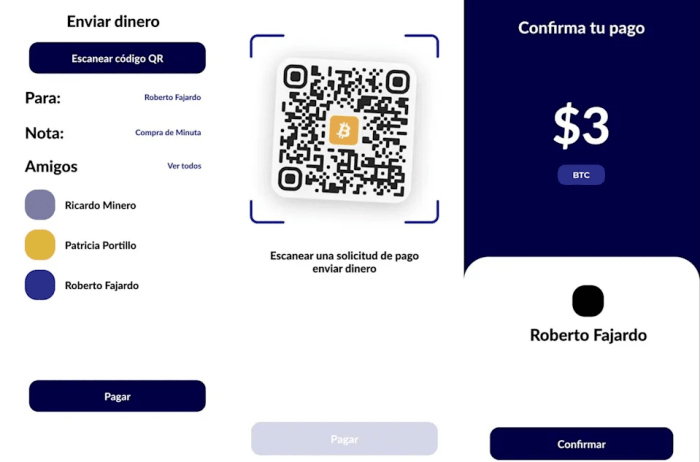 Making a payment in the Chivo wallet. Source: Twitter

Chivo wallet’s announcement follows the recent approval of bitcoin as legal tender in El Salvador. The bill, which was approved by the country’s congress earlier this month, regulates bitcoin as “unrestricted legal tender with liberating power, unlimited in any transaction, and to any title that public or private natural or legal persons require carrying out.” The law will come into effect in September.

The technical implementation behind El Salvador’s new official bitcoin wallet is still unclear. But it might be a product of the partnership the country has ensued with Lightning payments platform Strike. The startup, which initially went to the Central American country to help empower the Bitcoin Beach community, rapidly started meeting with Bukele and later helped the president announce the forthcoming law at the Bitcoin 2021 event.

Chivo also marks a response to the World Bank, which recently refused to help El Salvador accomplish its bitcoin goals. Furthermore, with El Salvador showing the world that it is possible to implement a bitcoin standard, other countries might follow.

Interview: Fighting For Freedom With Zuby

Watch This Episode On YouTubeListen To This Episode:During the 2020 COVID-19 lockdowns, countries across the globe cracked down on...

A St. Lawrence county town located in New York near the Canadian border, Massena, is another region in the...

64% of Adults from 10 Different Countries Would Use a Central Bank Digital Currency: Report – Bitcoin News

As central bank digital currencies (CBDCs) advance in testing, a number of countries have taken the lead in an...

What Do Bitcoin, Antifragility And Fantasy Football Have In Common?