Bitcoin has been hovering within the lower-$30,000 region throughout the past several hours, with bulls unable to take firm control over its price action.

This consolidation has hampered the rallies seen by altcoins like Ethereum, but it may ultimately prove to be a positive thing for BTC’s smaller counterparts if it persists.

One trader is now noting that a break above $32,000 could be all Bitcoin needs to retest its all-time highs once again.

At the time of writing, Bitcoin is trading down just under 2% at its current price of $31,450. This marks a slight decline from its recent highs of $35,000 set just a few days ago.

This decline first began when derivatives traders became overleveraged as BTC approached $35,000. From here, it faced a strong pullback that led it to $30,000.

It has been setting higher-lows and consolidating ever since this occurred.

One analyst pointed to $32,000 as a key level to watch in the near-term, noting that Bitcoin could be on the cusp of seeing major upside if bulls can shatter this level.

“BTC / USD: Bulls need to flip $32,000 to start pushing back higher to the local highs, honestly LTF we might see some more downside to range low, until this key region is flipped. I think in the midterm, there will be another move below $30,000 so try to position accordingly.” 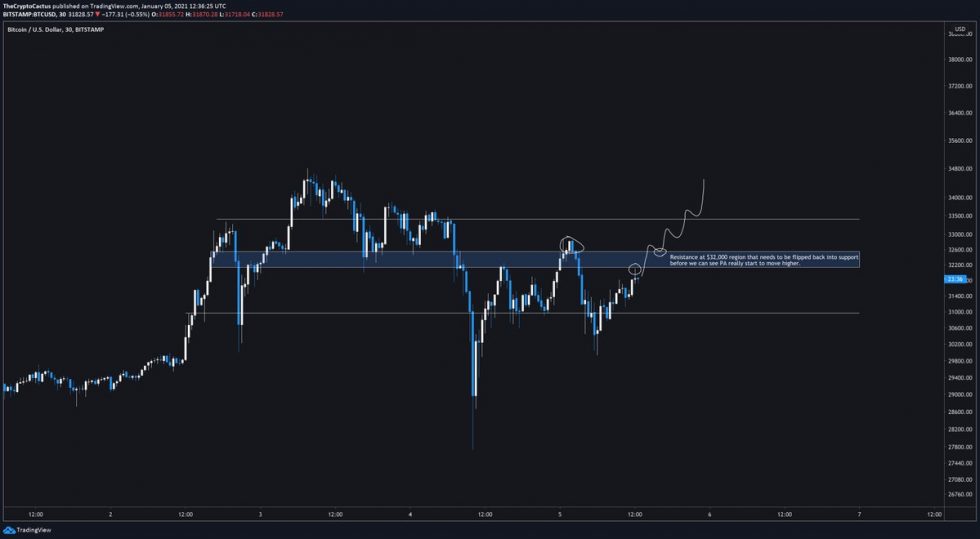 The coming few days should shine a light on just how important this level is for BTC, as a break above it could be imminent based on Bitcoin’s pattern of setting higher lows over the past few days.

Bitcoin stepped away from tailing price trends in the Nasdaq Composite, helped by more signs of institutional interest in...

Bitcoin and Ethereum, the world’s biggest cryptocurrencies by market cap, saw a mixed day on Monday as price chopped...

Bitcoin Is Replacing Gold At An “Accelerating Pace”

The narrative taking place across the finance industry, is that cryptocurrencies like Bitcoin and Ethereum are the way of...