It is well established at this point that bitcoin is the best form of sound money the world has ever seen. To recap, bitcoin excels in each of the qualities of money: durability, portability, divisibility, uniformity, scarcity and acceptability. Most importantly, bitcoin is the scarcest money ever, with a fixed supply of 21 million bitcoin that will ever exist. Regardless of demand, the supply is programmatically defined and will never be changed.

Sound money imposes fiscal discipline upon governments. Having a monetary system with a sound money base means that the money supply cannot be inflated at will by use of the printing machine. In turn, for governments to spend, they must provide value to their citizenry equal to the amount of tax revenue collected. Under a sound money system forever wars are not feasible, zombie companies (unprofitable companies still in business solely due to bailouts) don’t exist and individuals’ savings cannot be debased at will by bureaucrats.

Contrast the way in which governments must operate under a sound money system to how they operate today on an unsound (fiat currency) system. Forever wars are financed by endless money printing, zombie companies of all shapes and sizes are bailed out time and again, and individuals’ savings are debased at breakneck speeds.

Case in point: over 40% of all U.S. dollars in existence were printed between May 2020 and May 2021. To hammer the point home, this means that anyone holding U.S. dollars in that time period saw the value of their wealth drop by over 40%. Going back in history even further, since the dollar was created, it has lost over 96% of its value.

With sound money, the opposite phenomenon occurs, value is stored into the future without debasement, and purchasing power increases over time.

Economies flourish under sound money systems. When the unit of account is stable, and not manipulated at will by governments, economic actors enjoy increased ease of trade, increased levels of savings and generally higher levels of prosperity.

With the benefit of efficient economies, higher savings rates and increased prosperity, individuals and societies have the benefit of planning for the future, as opposed to constantly reacting to the present. This, in turn, leads to advancements in everything from architecture, literature and engineering to arts and sciences.

To demonstrate this point, we turn to two periods of history: the Golden Age of Rome, and the United States pre-1971.

The Golden Age Of Rome

The Golden Age of Rome existed under a sound money system. The aureus was the basic monetary unit of ancient Rome and the Roman world from the 1st century BC to the 4th century AD.

The aureus was made of gold, the soundest money commodity of the time. Under a sound money system, Rome’s Golden Age flourished and led to many groundbreaking achievements that the world has since benefitted from, including breakthroughs in architecture, such as the systemic use of the arch, which changed the way buildings were constructed forever (the Colosseum and the Pantheon were built during this period).

Additionally, there were breakthroughs in engineering, such as using aqueducts to funnel water into cities for drinking and irrigation purposes. The Romans also did things like develop the first legal system and build the most sophisticated system of roads the world had ever seen. Literature and art flourished, and the modern calendar was developed. Eventually, as has always been the case throughout history, the government moved off of a gold-backed sound money system and debased the currency, ultimately leading to the fall of the empire.

From 1879 to 1933, the U.S. was on a gold standard. All currency in circulation was backed one-to-one with gold held by the Federal Reserve.

Then, in 1933, President Roosevelt ordered all gold to be turned into the Federal Reserve for the set price of $20.67 per ounce. In 1934, the government arbitrarily increased the price of gold to $35 per ounce, effectively increasing the gold on the Federal Reserve’s balance sheets by 69%.

This increase in assets allowed the Federal Reserve to inflate the money supply. The government held the $35 per ounce price until August 15, 1971, when President Richard Nixon announced that the United States would no longer convert dollars to gold at a fixed value, thus completely abandoning the gold standard. How has the U.S. fared since 1971? Let’s look at some charts.

Compensation has not kept pace with the increase in productivity. Image source: https://wtfhappenedin1971.com/. 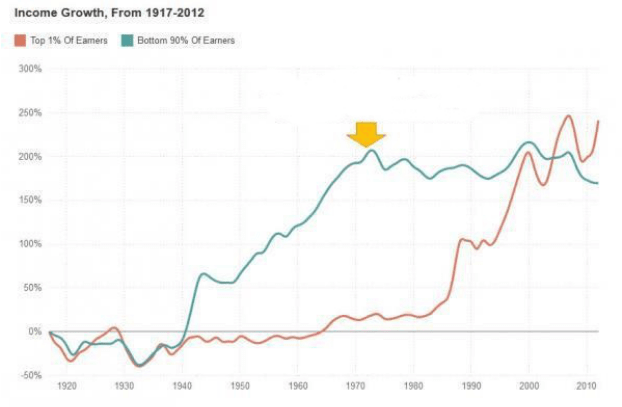 Income growth has been skewed ever more towards the top 1%. Image source: https://wtfhappenedin1971.com/. 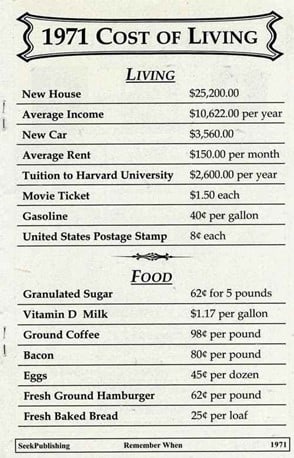 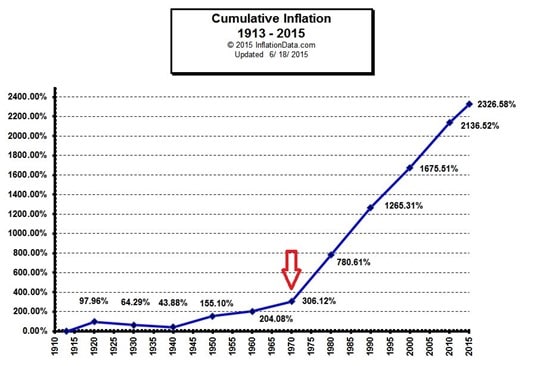 Inflation has accelerated at an increasing rate. Image source: https://wtfhappenedin1971.com/. 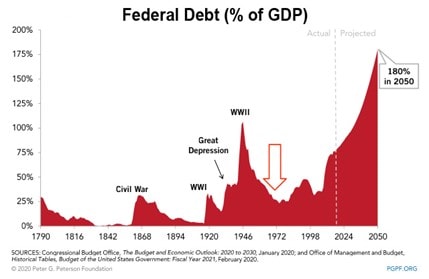 Federal debt as a percentage of GDP has skyrocketed. Image source: https://wtfhappenedin1971.com/. 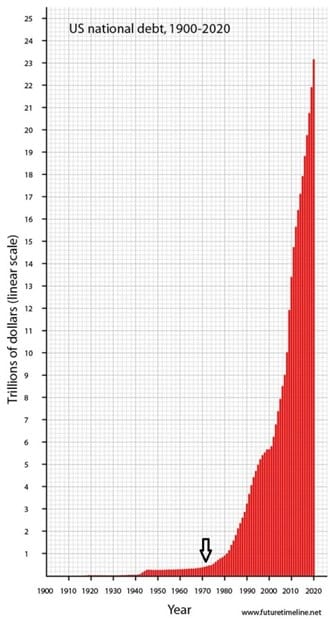 Federal debt has soared from well under $1 trillion to near $30 trillion today. Image source: https://wtfhappenedin1971.com/.

Contrast this with how economies function under a sound money system to how they operate today. The unit of account constantly fluctuates which makes trade unnecessarily complex and inefficient.

Take, for instance, the $6 trillion-dollar-plus foreign exchange market. Governments and companies employ millions of people who focus solely on currency conversions, international payment settlements, foreign currency reserve management, and on and on. None of that wasteful complexity exists on a sound money system.

Additionally, savings are near non-existent. Most U.S. savers have less than $5,000 in their bank accounts. Are people free to think long term and plan for the future when any type of financial setback will wipe out their savings completely? No, and analyzing the state of affairs across the world makes this painfully apparent.

Individuals living under a sound money system have many benefits, some of which we discussed above. Free from having to run ever faster and work ever longer in order to keep pace with the devaluation of their savings, individuals have the chance to focus on activities that benefit society. Under sound money systems, families have tighter bonds, communities grow stronger and individuals have the capacity to explore the arts, sciences, engineering and literature in a way that leads to breakthroughs that will benefit their societies as a whole.

A world under a bitcoin standard would look vastly different from today. Most importantly, the system will benefit all participants. A key aspect of bitcoin from this standpoint is that there is close to no inflation. Removing the ability for governments to print money will greatly reduce the wealth gap, which is the cause of many societal issues we see today.

Bitcoin also incentivizes saving and proper money management. There are no bailouts under a bitcoin standard. Personal and corporate responsibility will be paramount to success. Savers will no longer be punished for saving diligently only to have their savings debased on a whim by central bankers. People will be free to plan for the future knowing that the unit of account is stable and unchangeable.

Under a bitcoin standard, one is not penalized for patience and has no urgency to deploy capital. This incentivizes companies seeking capital to create real value before raising money in capital markets. This in turn will eradicate zombie companies subsisting only because they are beneficiaries of the easy monetary policies of today.

Bitcoin will also restore sanity to equity markets. Currently, equities are measured in dollars, which are an ever-growing unit of measurement, making it impossible to do any kind of rational valuation analysis of a business. Under a bitcoin standard, the unit of measurement that companies cash flows and valuations are measured in becomes a constant. The gravity of this cannot be emphasized enough.

Bitcoin encourages limited governmental control and spending and will initiate a shift toward an age of self sovereignty. This age of sovereignty, along with the necessity for governments to provide value to their citizenry, will cure many of the ills we see today due to the vast amount of wasted and misappropriated government spending.

Lastly, having bitcoin as a global reserve currency will empower more than just the United States. It will especially benefit citizens in countries with hyperinflated currencies (Venezuela, Zimbabwe, Argentina, etc.), as well as countries oppressed by dictatorships and other non-democratic forms of government. Fortunately, bitcoin gives the global citizenry another choice for storing their wealth.

I know what I’m choosing. Do you?

This is a guest post by Don. Opinions expressed are entirely their own and do not necessarily reflect those of BTC Inc or Bitcoin Magazine.

The crypto firm Blockchain.com is joining the slew of digital currency exchanges that have launched non-fungible token (NFT) marketplaces...

Marathon Digital Holdings mined less bitcoin in November than in the previous month as maintenance and upgrades to its...