How Many Bitcoin Wallets Hold More Than $1 Million?

Bitcoin has come a long way since its inception in 2009. With bitcoin’s market capitalization at just over $1 trillion, new on-chain data reveals that the number of millionaire members of the bitcoin rich list have ballooned.

But what is the “bitcoin rich list” and why should you care?

The bitcoin rich list refers to the list of bitcoin addresses that hold over $1 million worth of BTC. Since January 2021, over 100,000 wallets have met the qualification. Notably, the number swelled by 400% from just 25,000 millionaires five months ago.

However, the list is not as large as it is often portrayed to be. And it looks like the upside has a long way to go because of two simple facts.

First: There are approximately 46.8 million millionaires in the world holding at least $158.3 trillion of wealth — a number of fiat millionaires that clearly dwarfs the 100,000 bitcoin millionaire wallets. 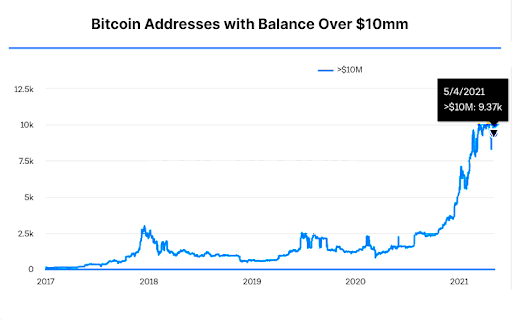 Second: The number of around 100,000 accounts holding over $1 million doesn’t mean each account is owned by a unique person. Why? Of course, individuals can own multiple bitcoin addresses.

After all, you can use on-chain analysis to find out how many bitcoin accounts exist and how much is in each account. But you can’t see who owns those accounts.

So, the actual number of bitcoin millionaires is almost certainly lower than 100,000 if you assume some of these addresses are held by the same individuals.

The small number of bitcoin millionaires (just 0.2% of the 46.8 millionaires in the world) offers a perspective that we are still in the early innings with bitcoin’s adoption rate. As more millionaires diversify a percentage of their wealth from fiat to bitcoin, the asset’s price can go even higher.

Another Catalyst For More Millionaires Owning Bitcoin In The Future

Banks are the key catalyst that can drive up the total net worth held in bitcoin. Namely, more banks are offering institutional services for bitcoin that would allow high-net-worth clients to easily own bitcoin within their current bank accounts.

Hundreds of smaller banks have already signed on to offer regulated funds for bitcoin. As a result, giants like JPMorgan Chase & Co. and Bank of America could face pressure to offer bitcoin to their retail banking customers.

Bitcoin is also gaining traction in the private wealth management industry, which handles trillions of dollars for high-net-worth clients.

In March, Morgan Stanley, a giant in wealth management with $4 trillion in client assets, told its financial advisors that it is launching access to three funds that enable exposure to bitcoin. A few weeks later, Goldman Sachs and JPMorgan followed with their own statements about launching bitcoin services for their private clients.

Moreover, U.S. Bank, which is part of U.S. Bancorp, the fifth-largest bank in the United States, announced it would offer a cryptocurrency custody product with the engagement of a sub-custodian for fund servicing.

Bottom line: With a growing number of banks making it easier for high-net-worth individuals to buy and sell bitcoin, the number of their private client millionaires investing in bitcoin could skyrocket in the future. Bitcoin’s price may follow, as well.

This is a guest post by Portfolio Insider. Opinions expressed are entirely their own and do not necessarily reflect those of BTC Inc or Bitcoin Magazine.

Could Advanced Quantum Computing Pose A Risk To Bitcoin Security?

Rapid progress in quantum computing is predicted by some to have crucial ramifications in domains using public-key cryptography, such...

Investment banking and asset management firm JMP Securities says that “The crypto economy is entering the mainstream,” emphasizing that...

In March 2020, major stock market indexes saw some of the worst price collapses in decades, as markets confronted...

The owner of the NBA team Dallas Mavericks, Mark Cuban, has said “no” to investing in bitcoin-based exchange-traded funds...

The shocking, or not shocking, revelations given by the International Consortium of Investigative Journalists, known as the Pandora Papers,...