How Much More Loss Can The Bitcoin Market Sustain?

In today’s Daily Dive, we’re covering the state of realized losses and profit in the market and an update to derivatives markets. With bitcoin’s price falling, how much more loss can the market sustain and is there more short-term downside?

Over the last week, we’ve seen a rising level of realized losses on-chain during the latest price drawdown. During bitcoin’s drawdowns over the last six months, realized losses over $1 billion on a 7-day moving average has been a consistent ceiling for each new sell-off.

Back in May, realized losses hit over $2 billion, the highest level in the last five years, which was driven by serious derivatives liquidations.

Yet as a percent of bitcoin’s market cap, the latest round of realized losses and selling are relatively small to market capitulation we’ve seen before. 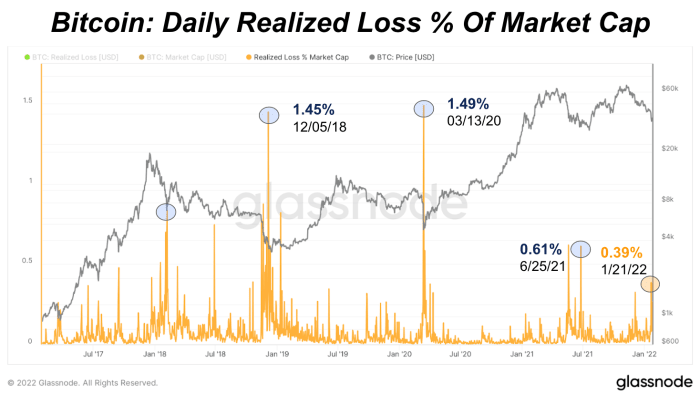 Historically, the Net Unrealized Profit/Loss Ratio (NUPL) has been a useful indicator to show when the market is in full capitulation and has bottomed. As a refresher, NUPL is calculated as (Market Cap – Realized Cap) / Market Cap. Currently the total market looks to be in a neutral state, but historically we’ve seen every rise in NUPL followed by a major capitulation period. These periods bring the market back to (and even below) the market’s cost basis.