How to Be a Crypto ‘SAMURAI’

Contrary to Hollywood portrayals, it’s not all “models and bottles” for portfolio managers, unless those bottles solely contain aspirin and the models they are chasing can be found in a spreadsheet.

At the end of the day (or, more likely, quarter), portfolio managers must show they can add value or else clients will find someone who can or even just buy an index fund.

Those same institutions that measured themselves against such benchmarks are now turning to bitcoin. Along with it comes interest in alternative cryptocurrencies (altcoins).

Five years ago, there may have been more than a few cryptos out there, but bitcoin accounted for roughly 95% of the entire market capitalization of all cryptocurrencies. In early 2018, it was just about a third of crypto’s market cap as the initial coin offering (ICO) boom led to a plethora of new entrants. Many of the early alternatives died out but others did not (hello, ether). As recently as a year ago, bitcoin boasted 70% of the aggregate market cap. Today, bitcoin has only a little above 40%.

New entrants have once more grabbed the market’s attention. Some appear to be more than a flash in the pan. Many will never catch fire. By CoinMarketCap’s count, there are 15,765 cryptocurrencies as of Friday morning in New York, and that number grows every day, it seems, with many of those listed not trading on any markets at all.

This past week, CoinDesk announced the launch of something called the Digital Asset Classification Standard (DACS). It covers the top 500 cryptocurrencies by market cap, a reasonable limit on the universe of relevant currencies. The goal is to give investors a sense of where a coin fits in this universe. It answers questions like, “What are its peers?” and “What are its main competitors?”

The six sectors identified are currency, smart contract platform, DeFi, entertainment, computing and digitization. Those, in turn, are broken down into industry groups which, in turn, are each made up of industries.

Give an example already

The DACS is a foundation for building indices, such as the CoinDesk DeFi Index (DFX) and the CoinDesk Large Cap Index (DLCX). Both are weighted by market cap, with the former comprising 10 decentralized finance (DeFi) coins while the latter is composed of eight cryptocurrencies that make up at least 70% of the market cap of all cryptocurrencies combined.

Let’s give a simple example to show how the right index helps evaluate a fund’s performance.

Imagine a high net worth banker named Bob. He heard about this whole DeFi thing and decided he better hedge his wealth by putting money into it. After all, if it really is the wave of the future, he may be out of a job in a few years.

Bob called his daughter’s friend, Alice, a portfolio manager in the crypto space. Alice had a fund in DeFi that consisted solely of two assets, Uniswap’s UNI token and Yearn Finance’s YFI. Bob wrote Alice a seven-figure check, and she began trading on July 1, 2021, at which time the portfolio was weighted 50% each for UNI and YFI.

At the end of the quarter, Alice phoned Bob, who had completely forgotten about that fat check.

“Congratulations, Bob! Your DeFi portfolio is up 9.24% this past quarter. That’s the weighted average of the two assets in the portfolio you invested in. It totally crushed the S&P 500, which was down 0.29%. Aren’t I a genius?” she beamed. 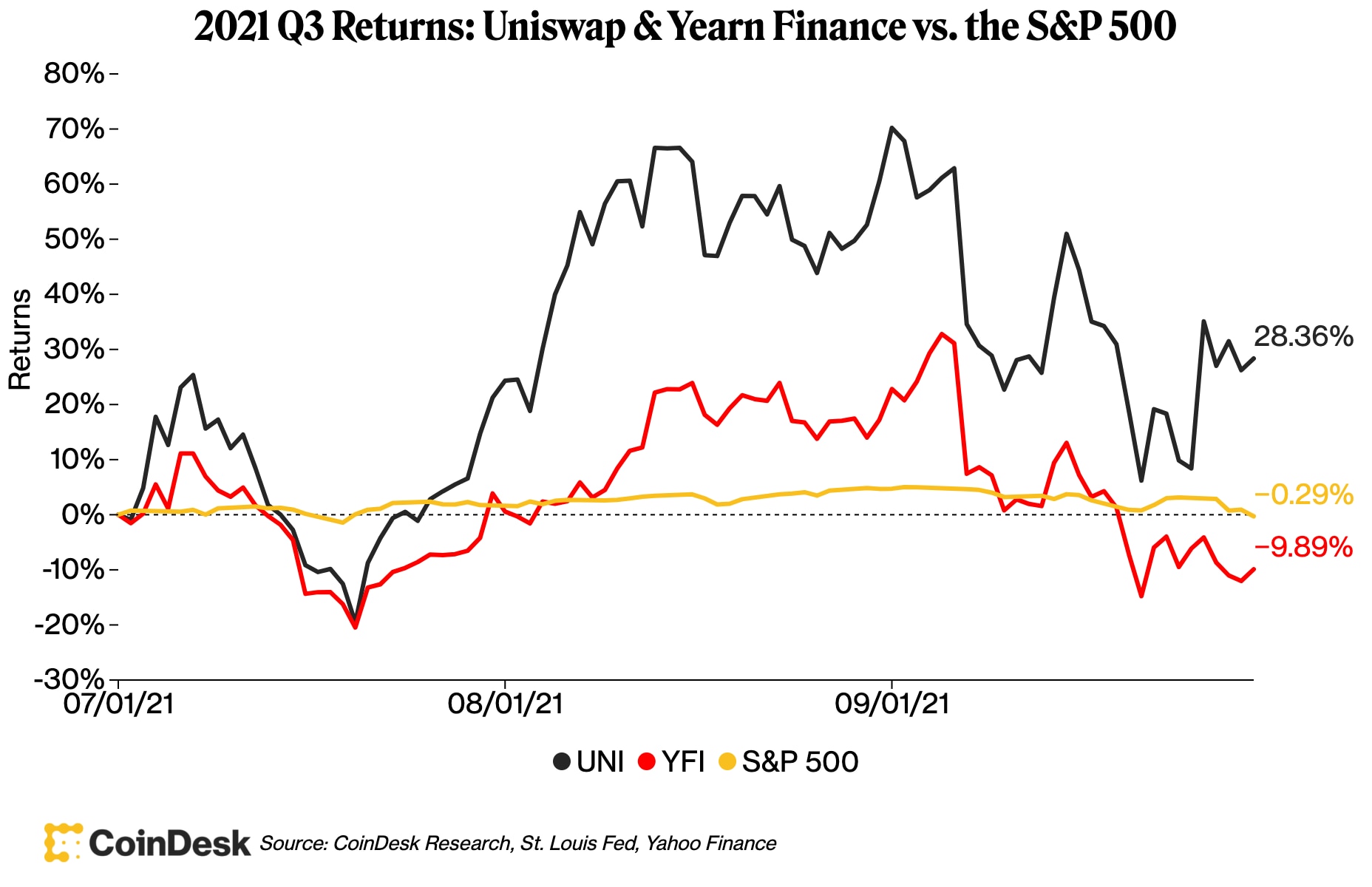 On the surface, Alice indeed looks like a great asset manager. But did she really add value? Yes, but not as much as she thinks she did.

Being a crypto SAMURAI

In trying to find the right benchmark for a portfolio, it helps to remember the acronym SAMURAI. That means the index should be:

Those are the seven characteristics of a proper benchmark.

(For a good discussion of all this, check out this CFA Society United Kingdom paper.)

In the example above, the S&P 500 was not the appropriate benchmark. It’s a U.S. large-cap equity index, not anywhere near related to DeFi.

Bob tells Alice, “What are you talking about? You got crushed by bitcoin. It returned 30.58% in Q3. That’s 21.34 points higher than your DeFi portfolio.” 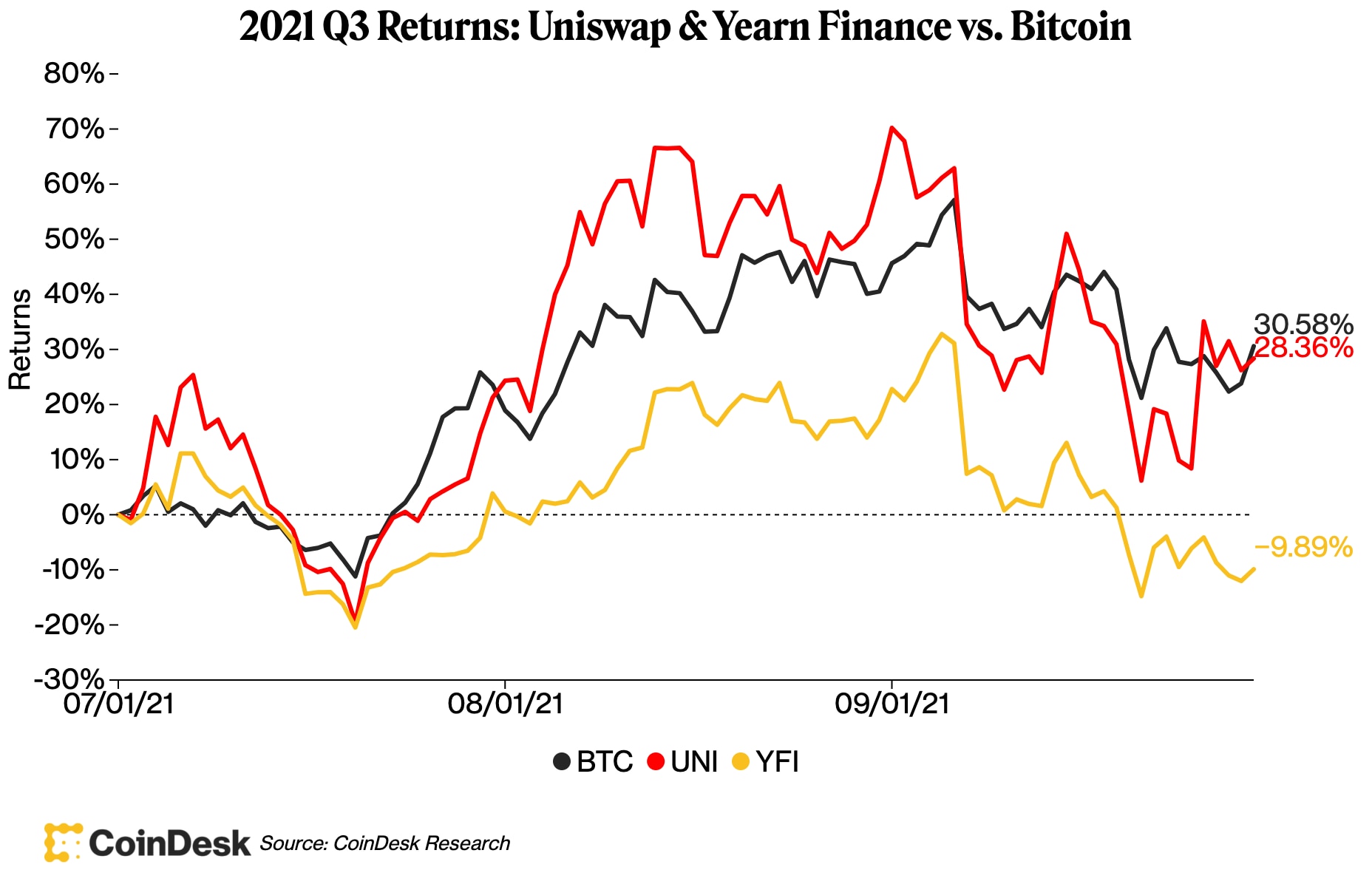 Yet bitcoin, too, is inappropriate. Even though it’s a cryptocurrency – and the first and largest, at that – it’s in the currency sector, as the DACS shows. It’s not a DeFi play, necessarily.

Alice protests Bob’s use of bitcoin. “Okay, fine, you did even worse against ether and everyone knows ether is a big DeFi bet,” he shot back. “ETH returned 42.21% in the quarter.” 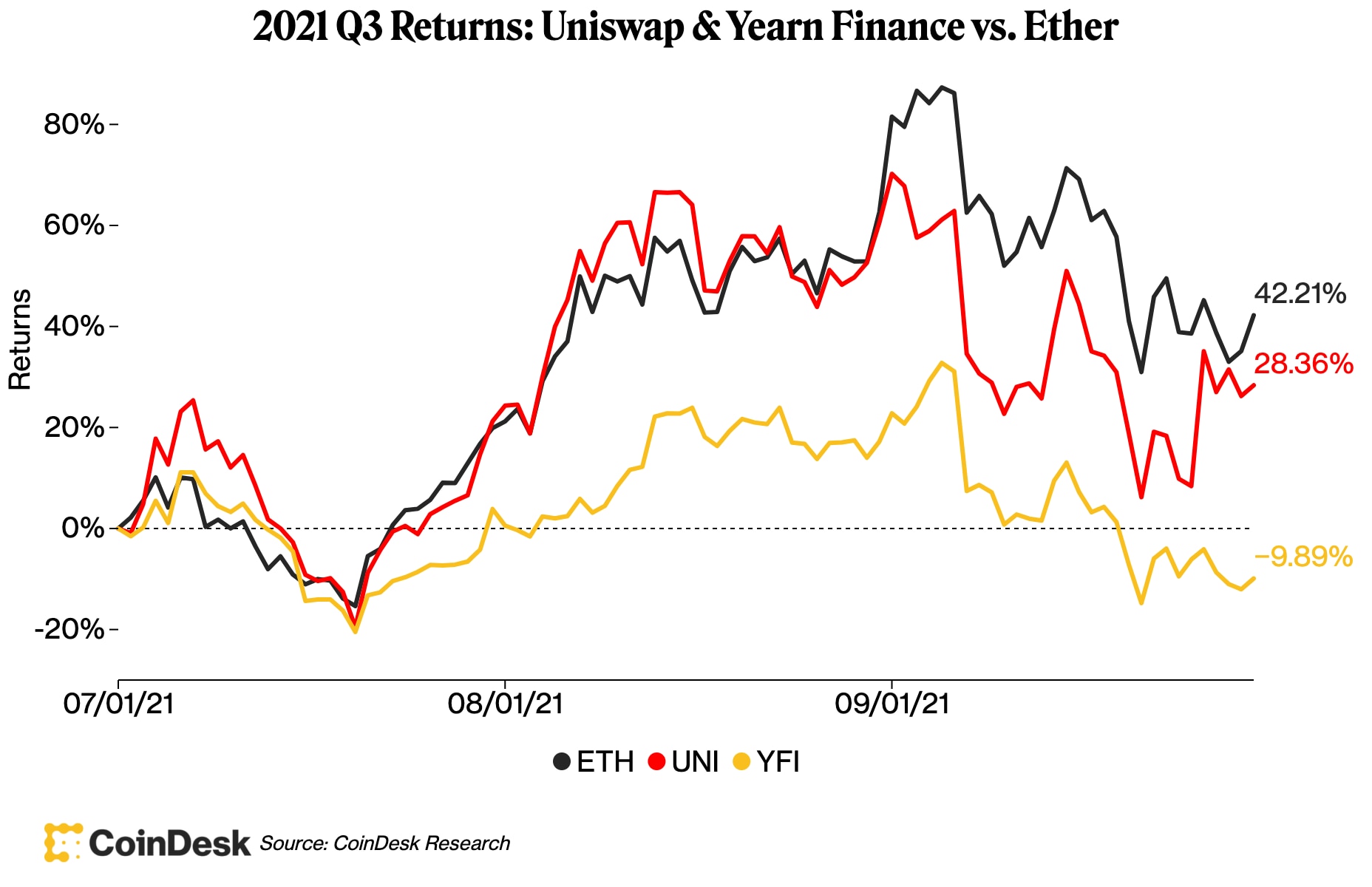 Again, that’s another inappropriate benchmark. Ether may be a very popular asset to “lock,” or invest, in DeFi, but it’s in the smart contract platform sector.

In fact, there is an appropriate index for Alice to use and that’s the CoinDesk DeFi Index (DFX). Both Uniswap and Yearn Finance are in it. 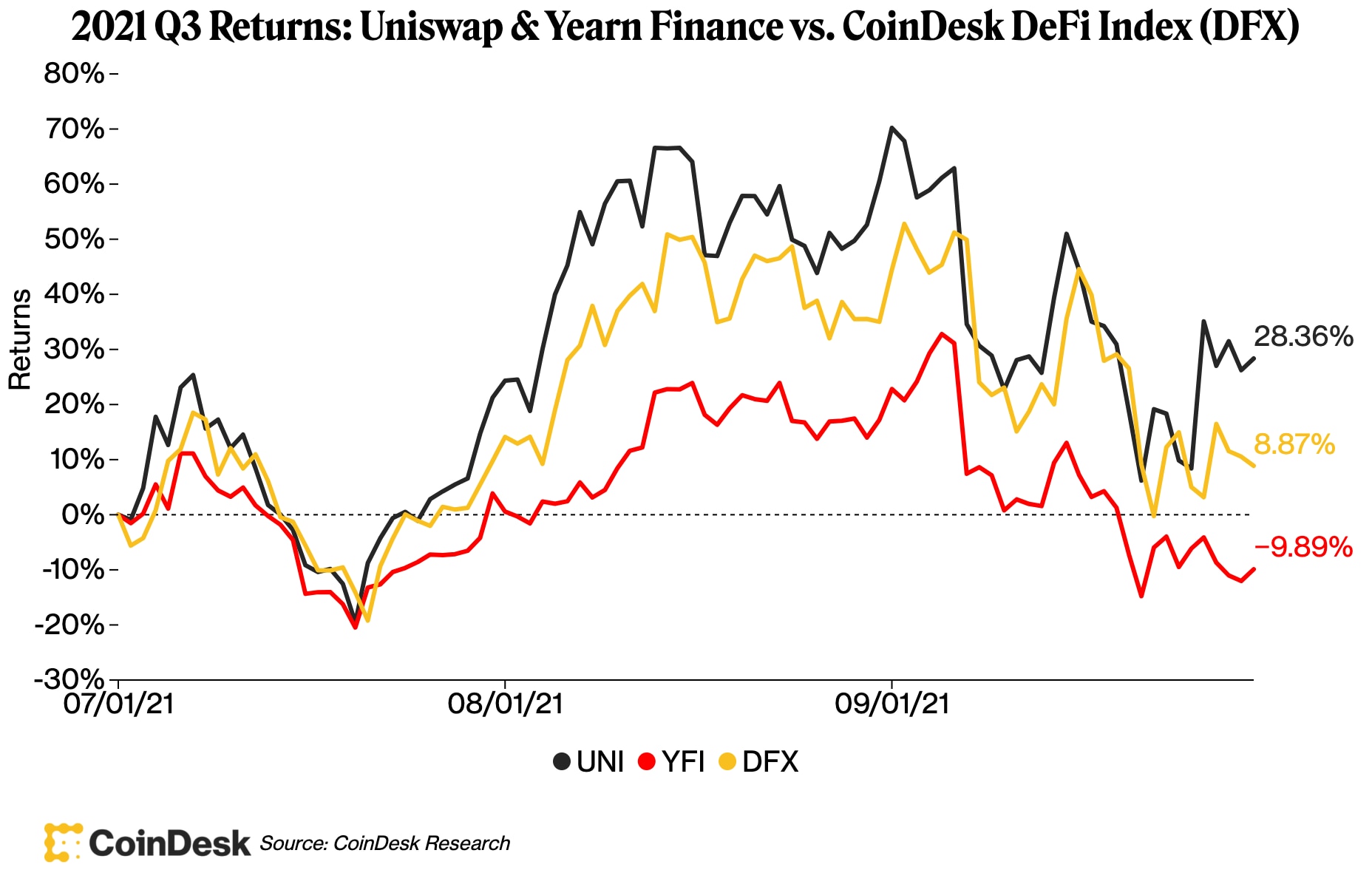 During the third quarter, the DFX returned 8.87%. That means Alice’s fund gave Bob an extra 0.37% for the quarter compared to if he had just invested in a fund tracking the DeFi index. That’s a victory, albeit a smaller one than Alice had claimed. It may not have returned the same as bitcoin or ether, but Bob’s goal was to gain exposure to DeFi, not to other types of cryptocurrencies, when he invested with Alice.

Win some, lose some

Fast forward to Dec. 16 and Bob had mixed feelings about his investment. His DeFi holdings with Alice are down 20.40% since July 1, slightly better – though still negative – compared to the DFX’s loss of 20.79%. 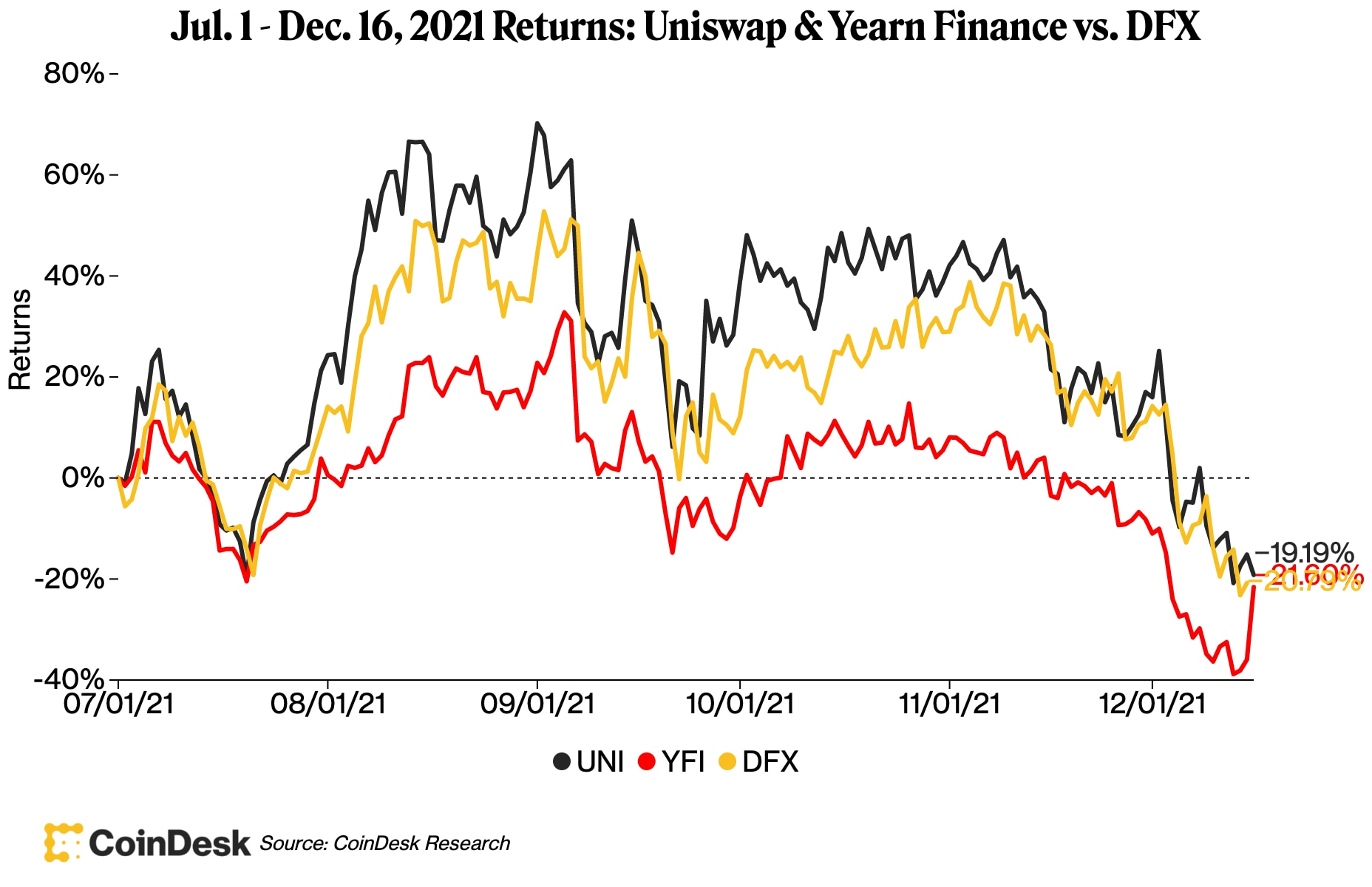 Remember, he wanted: 1) to have exposure to DeFi and 2) hire someone who was going to add value. Given that Alice beat the index by only a hair because of Friday’s rally in YFI, he may want to reconsider his investment with her. He could be better off in the long term investing in something that replicated the more diversified DeFi index than investing with Alice in a volatile, two-asset portfolio.

Alice, of course, could invest in any of or all ten assets in the DFX (or even those outside of it) if her goal is to come up with a DeFi portfolio. How she weighs those assets in her fund is the result of her research and her skill.

For investors, that can be easily measured only when using the right benchmark.