Michael Saylor’s Bitcoin Mining Council with 9 founding and 14 new members, presented their research on energy use in bitcoin mining to the public July 1, 2021, as a first step in attempting to counteract much of the misinformation around this issue.

With 14 new member mining companies in addition to 9 founding members the council now represents 32% of the mining industry.

Getting The Message Out

One of the council’s challenges is to get the public familiar with a few basic concepts around the amount of energy used in mining and the percent of sustainable sources in that energy mix.

The main messages to get out — and you’ve likely seen them if you’re familiar with the issue — are the following:

1. The Bitcoin network uses a negligible amount of the world’s energy — 189 terawatt hours as compared to 162,194 terawatt hours of total global energy use (0.02% of all energy consumed).

Bitcoin is powered by a higher mix of sustainable energy (56%) than any other industry or major country. 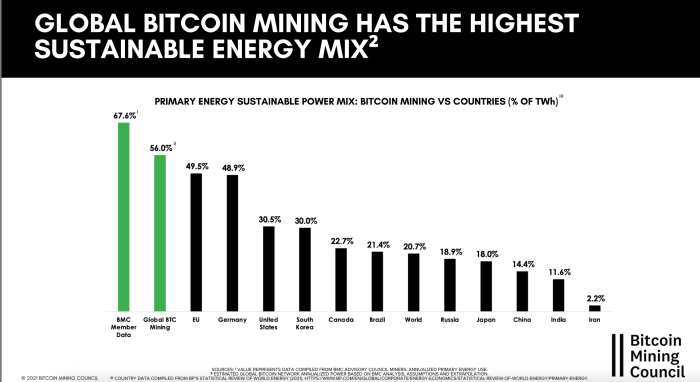 For those who have been in the space for a decade it’s hard to believe that this China ban is the real thing, but as the days have passed since the first edict in May 2021, it’s becoming more clear that, this time, China is serious — possibly wanting to protect their own digital yuan.

As this historic change to the bitcoin landscape unfolds, its far-reaching effects are becoming more clear as well.

As the hash rate drops to historic lows, mainly because of Chinese miners leaving or just shutting down, the mining business has become more profitable for the remaining miners around the world.

This change in hash rate dominance has inadvertently caused an increase in the percentage of renewables used in the Bitcoin network as mining companies look for the most cost-effective energy sources which are generally renewables at the edge of the grid.

In addition, the use of coal in China — mainly in the off rainy season but also used year round in some mining — will no longer be a factor.

Chinese miners relocating now will likely leave behind older equipment like S9s for more energy efficient ASICs like the S19s.

Bigger operations in places like North America can now count on easier access to the latest and most efficient models (an S19 is five times more efficient than a S9).

The Bitcoin Mining Council will continue working on educating the public and particularly investors on the importance of the global mining industry. The industry’s sustainable electricity mix has grown to approximately 56% during Q2 2021, making it one of the most sustainable industries globally.

As Feinstein noted in a release, the council’s briefing comes at a pivotal moment for the industry as the China exodus fast-forwards the decentralization of bitcoin mining.

“Despite China shutting down over 60 percent of the global Bitcoin network, the Bitcoin network experienced zero downtime, no bailouts, has registered no bankruptcies and simply adapted by redeploying its infrastructure into regions that have greater freedoms,” Mr. Feinstein said. “The network remains as strong as ever, it simply shrugs off adversity and moves forward.”

Eighty-one countries are now exploring central bank digital currencies (CBDCs), according to a new tracker. This number is 46...

Amazon Is Getting Serious About Accepting Bitcoin For Payment

Amazon has begun its search to hire a Digital Currency and Blockchain Product Lead for its Payment Acceptance &...