Listen To This Episode:

In this episode of Bitcoin Magazine’s “Fed Watch” podcast, Christian Keroles and I got listeners up to speed on Jerome Powell’s reappointment as chairman of the Federal Reserve, the recent leaks as an attempt to sabotage that reappointment, and news on the current state of monetary policy at the European Central Bank (ECB) and the Bank of Japan (BoJ).

Then, we had a lengthy conversation about geopolitical developments as they pertain to the U.S., Europe, and the shift to the Pacific, tying in bitcoin as part of the coming great game. Of course, we covered the Bitcoin ETF (BITO) that launched this week as well. It’s a little bit of a different episode, kind of a “this is where we are in the world of central banking” discussion.

Drama Around The Powell Reappointment

This leak comes on the heels of similar leaks about Governors Rosengren and Kaplan, who were forced to resign in the associated controversy. Powell came out smelling a bit like roses. Initially, his chances for reappointment as tracked on the website PredictIt fell sharply, but within 24 hours, as the market had time to digest the news, his chances rebounded to higher than before, bottoming around 65% and then quickly rebounding to 76%.

It looks as though Powell will get another term. Lael Brainard appears to be the pick of the European financial elites (Davos crowd), as more dovish and friendly to central bank digital currencies (CBDCs). We discussed how the Fed chairman position plays into the rapidly-evolving geopolitical shifts happening between Europe and the U.S.

The ECB is in the process of increasing its purchase of EU-issued bonds as part of its quantitative easing (QE) program. The ECB faces a current limit of EU-issued asset purchases as 10% of its total. The other limit it faces is that the ECB is only allowed to own one-third of any single country’s outstanding debt. By increasing the amount of EU-issued bonds it can purchase it will give the ECB “more room to maneuver.”

The other update from the ECB is the increasing use of the term “transitory” to describe its inflation, just like what we saw in the U.S. a few months ago. Europe’s headline CPI inflation rate is 3.2% in the most recent month, well above its 2% target.

Japan is a different story when it comes to inflation. Despite being the first to do QE (seen by many as inflationary) and being far and away the central bank with the highest assets-to-GDP ratio, it is stuck at near zero inflation. The only other major news out of Japan is its vocal adoption of the climate goals as part of its monetary policy goals. Perhaps that is to distract from its obvious failure and ineptitude?

We spoke a little about the following charts, which show that, for all the bluster about inflation, the numbers actually are backwards.

As you can see, the ECB has the highest total assets and continues to do more expansionary monetary policy than the Fed, yet its inflation rate is significantly below the U.S. For the central bank’s assets as a percentage of GDP, Japan is very far ahead due to what people call expansionary monetary policy, yet they have the lowest inflation of any major economy. Backwards. 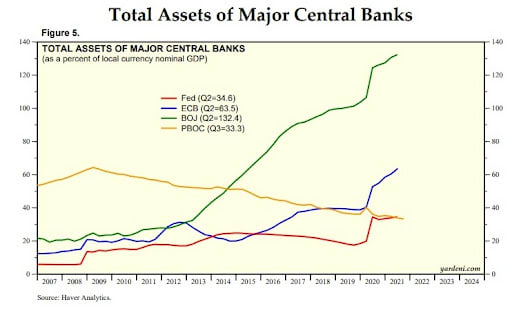 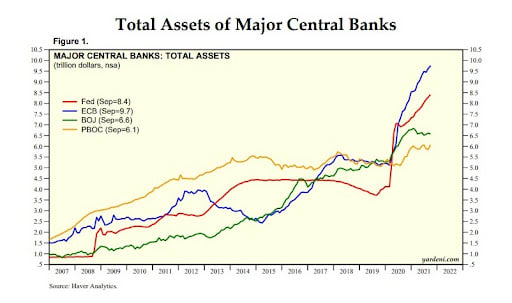 Lastly, we spoke broadly about Bitcoin aligning incentives and how it might be used by one side of the shifting geopolitical situation as an antidote for the push for CBDCs.

In the links section below, I include a great article that outlines the situation regarding the AUKUS alliance as a refutation of NATO and Europe. The latter has lost nearly all geopolitical weight. The U.S. and China are the new axis of power, it’s no longer the U.S. and Russia. Europe instantly loses strategic importance, but is still trying to be in the great game by controlling certain aspects of the international order (like placing Brainard as chairman at the Fed).

Of course, we couldn’t end the episode without talking about the Bitcoin ETF launch. We gave our opinions and insights about that and bitcoin mining to finish off the show.

There is No Getting off Europe’s Elevator to Hell: https://tomluongo.me/2021/10/18/there-is-no-getting-off-europe-elevator-to-hell/

A bug in the token lending contract of the Solana Program Library (SPL) was recently found and fixed by...

How An 18th Century Gambler Paved The Way For Central Banks, And Necessitated Bitcoin

I always love writing about the bridge between current events and their (often entertaining) counterparts or parallels in history....

sponsored Singapore-based cryptocurrency exchange Phemex is celebrating its 2nd anniversary this November. It’s been an eventful couple of years...

Facing The Chasm: The Future Of Bitcoin And The Metaverse

We tend to think of the world as the past, present and future, and as these distinguished moments in...

You might call Floki Inu a meme-coin, but the token secured a major sponsorship over the past week that...