“In February 2021, we invested $170 million in bitcoin as we believe cryptocurrencies are an instrument of economic empowerment, which aligns with the company’s purpose” per the earnings report.

With this $170 million purchase, the company bought an additional 3,318 bitcoin at an average price of $51,235.68 per bitcoin. This supplemented Square’s initial purchase of 4,709 bitcoin for $50 million that the company announced in October 2020, which are now worth approximately $263.2 million at the time of writing. The company currently holds 8,027 bitcoin, worth approximately $448 million, giving it the third-largest bitcoin holdings of any publicly-traded company.

“We see bitcoin as the internet’s potential to have a native currency, and we want to further that as much as we can,” Jack Dorsey, Square’s CEO, said during an earnings call. “Our focus is enabling bitcoin to be the native currency, it removes a bunch of friction for our business and we believe fully that it creates more opportunities for economic empowerment around the world.”

Square generated a staggering $3.51 billion in bitcoin revenue during the first quarter of 2021, along with $75 million of bitcoin gross profit, each up approximately 1,000% year over year. The company’s gross profit was $964 million, up 79% year over year. 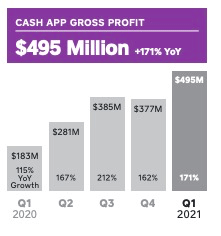 At the end of the quarter, Square had $4.8 billion in available liquidity, with $4.3 billion in cash and cash equivalents, paired with $500 million available to withdraw from the company’s revolving credit facility.

In the future, Square will continue to provide bitcoin services to customers and hold bitcoin as an instrument for economic empowerment, putting itself ahead of competitors.

Could Advanced Quantum Computing Pose A Risk To Bitcoin Security?

Rapid progress in quantum computing is predicted by some to have crucial ramifications in domains using public-key cryptography, such...

Investment banking and asset management firm JMP Securities says that “The crypto economy is entering the mainstream,” emphasizing that...

In March 2020, major stock market indexes saw some of the worst price collapses in decades, as markets confronted...

The owner of the NBA team Dallas Mavericks, Mark Cuban, has said “no” to investing in bitcoin-based exchange-traded funds...

The shocking, or not shocking, revelations given by the International Consortium of Investigative Journalists, known as the Pandora Papers,...