Game theory is the science of multi-agent decision making. It uses mathematics to study the strategic interaction of rational decision makers. Game theory has social, logical, and computer science applications. It also has Bitcoin applications at the personal, social, business, and nation state levels.

For the purposes of this essay we will consider “players” of the Bitcoin game to be those not only holding some Bitcoin but also running a node. We will here define “moves” to be on-chain transactions, or the lack thereof on the public Bitcoin ledger.

If we consider Bitcoin to be an accumulation game, its information is perfect on a surface level, but imperfect much beyond that. It would appear all the node runners know all the strategies and payoffs available to other players, for example they can audit how much Bitcoin they have, and they can even look into how much Bitcoin other addresses have generally on the public ledger, although matching up all the Bitcoin addresses to specific players is an impossible task. Further, all players can see the massive payoff to the common strategy of hodling.

The inverse is also true, players are generally aware that selling sats at any point puts them at great risk of having to buy sats back at a higher or sometimes infeasible price. Most players who sold their hundreds and thousands of Bitcoin during the early years will never possess nearly that number of Bitcoin again. The act of hodling is an emergent strategy that takes players varying amounts of time to adopt, although there was nothing stopping someone from hodling Bitcoin from the beginning. Indeed, Satoshi taught us to hold our Bitcoin from the onset.

The Bitcoin supply is auditable for all the players, the consensus rules are publicly available for every player to verify. All of the moves that have been made, the on-chain transactions are public, although attributing specific moves to specific players is often impossible.

Bitcoin could be considered a game of complete information, which requires only that players know the strategies and payoffs available to other players. This is because all rational Bitcoin strategies boil down to increasing the rate of accumulation, and not selling Bitcoin accumulated.

A game of incomplete information becomes a game of imperfect information when one or more players makes a move by nature, or one without stake in a strategic outcome, effectively generating randomness. Proof of stake securities operate like this. Outside of Bitcoin, one can never truly be certain one owns cryptocurrency because it is always susceptible to confiscation or negation via a hard fork initiated by some form of governance. Bitcoin assures you of your property, and does not disenfranchise players through upgrades. Although one could argue there are many moves by nature in Bitcoin as well, in the sense that the markets are irrational, but they don’t appear to be random.

Alpha—beta pruning is a type of computer program that uses a search algorithm. The program stops evaluating a move when it is found to be worse than one that was examined before. Artificial neural networks train through reinforcement learning to make games like chess more computationally tractable. Many people who come to Bitcoin make strategic mistakes at first, those with good internal alpha-beta pruning processes tend to forgo trading stocks and other assets, purchasing cryptocurrencies, and purchasing much of anything at all outside of Bitcoin.

A game is cooperative if players can form alliances that are externally enforced. Accumulating Bitcoin is in a broader sense cooperative. Anecdotally, one can probably stack more Bitcoin working for a Bitcoin company, which presents further opportunities to work with more people who have Bitcoin than working at a grocery store, which presents likely no growth opportunities, at a wage that is inflated away. The Bitcoin network is full of companies and mining firms who are reallocating capital in ways that are mutually beneficial to employers and employees alike. In this way Bitcoin accumulation incentivizes Bitcoin holders working together to bring products of value to market.

Games in which players can form agreements but only through self-enforcement, (e.g., a credible threat) are non-cooperative. Cooperative games can be studied with coalition forming predictions, joint group actions, and collective payoffs. Bitcoin exchanges, miners, mining pools, and businesses are all diligently studied in this way.

The Prisoner’s Dilemma is a game which proves why two rational individuals acting in their own self interest may not cooperate to achieve an optimal outcome. This theoretical game is played as follows: Two friends are arrested for a crime. They are held in solitary cells without means of communicating with one another. The prosecutor’s do not have enough evidence to imprison both people on the principal charge, but they can both be imprisoned for lesser charges. Each person is offered the same bargain, in their own cell, at the same time. They are each given the option to cooperate with one another by remaining silent, or to betray, and testify that the other person committed the crime.

In this game there are four possible outcomes*:

1) A and B both betray each other, and each of them serves two years in prison.

2) A betrays B, but B remains silent. A is freed, while B serves three years in prison.

3) A remains silent, but B betrays A. A serves three years in prison, while B is freed.

4) A and B both remain silent. Both of them will serve only one year in prison for the lesser charge.

* It is implied that the decision to betray or remain silent will not affect a player’s reputation or well being in the future. Imagine there are no repercussions outside of the possible prison sentences. The strategy to this game changes when players play multiple times in a row, but that is a topic for another essay.

Below is the payoff Matrix for Prisoner’s Dilemma.

Payoff Matrix for The Prisoner’s Dilemma

Description of the Payoff Matrix

We can see from this payoff matrix that to achieve the optimal outcome one player must betray the other. That means that two purely rational players will betray each other. Though there is a slight advantage in both players remaining silent (a shorter prison sentence), the risk of your partner defecting is very high. The Prisoner’s Dilemma is a non-cooperative game, as the players have no information about the other player’s respective choice, so there is no means of agreement, but even if they could agree, there is no external enforcement agent binding players to their agreement. The Prisoner’s Dilemma is a game of complete information in that each knows the payoffs and strategies available to the other, but also one of imperfect information, because, at the decisive moment, one does not know whether their co-player has kept silent or betrayed.

How does this apply to Bitcoin? A similar model can be found on any scale in our Bitcoin game. If you take any two individuals, businesses, competing nations, large corporations, any entities for whom the goal is to acquire more capital and enrich themselves, they are all witting or unwitting participants in the Bitcoin Dilemma. Players can either choose to accumulate Bitcoin at any moment or defer to a higher price. 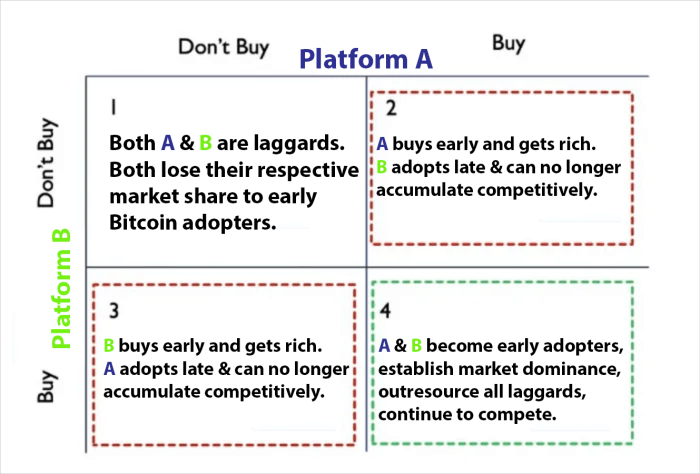 Payoff Matrix for The Bitcoin Dilemma

On September 7th, El Salvador became the first country to make Bitcoin legal tender. The world is watching this experiment, and Bitcoiners are eager to see what country will be next to adopt Bitcoin as nations are forced to compete through accumulating or be left behind.

In September, Edward Snowden took to Twitter to urge nations to embrace Bitcoin. After El Salvador made Bitcoin legal tender, the game-theoretic prisoner’s dilemma of nation’s Bitcoin adoption started playing out in global geopolitics. The famous whistleblower highlighted that Bitcoin favors those entities (at any level) that adopt it early, thereby putting pressure on other parties, which will be penalized for being laggards.

Adoption works like this on an individual level too, any insular community ignorant of Bitcoin can live some time without noticing the effects of not owning Bitcoin, although as soon as one member of the community begins to own the hardest money known to us, and that stack begins to appreciate, those who notice their success are presented at every moment with a choice to buy Bitcoin now or put off buying Bitcoin, only to buy it later at a higher price.

Read The Center Cannot Hold: 8: “Bitcoin Is The Singularity”

Read The Language of Bitcoin: 5: “Bitcoin Has No Competition”

Read The Language of Bitcoin: 4: “Bitcoin And Existential Risk”

Read The Language of Bitcoin: 3: “Bitcoin: The First and Final Rival Money”

Read The Language of Bitcoin: 1: “BTC Is The Best Explanation For The Way Money Is”

press release PRESS RELEASE. EverRise, the DeFi project that introduced the concept of buybacks in cryptocurrency, is going live...

Invesco has launched a bitcoin exchange-traded product in Europe.The Invesco Physical Bitcoin fund is listed on the Deutsche Boerse...

The Indian government has answered three sets of questions in parliament regarding bitcoin transactions, the high-profile bitcoin scam in...

Part three in the “Bitcoin: The Big Bang To End All Cycles” series.Today, we will observe Bitcoin through the...

Bitcoin mining companies are now increasingly experimenting with immersion cooling, a form of cooling that allows them to get...