The below is a direct excerpt of Marty’s Bent Issue #1142: “This is what normalization looks like.” Sign up for the newsletter here. 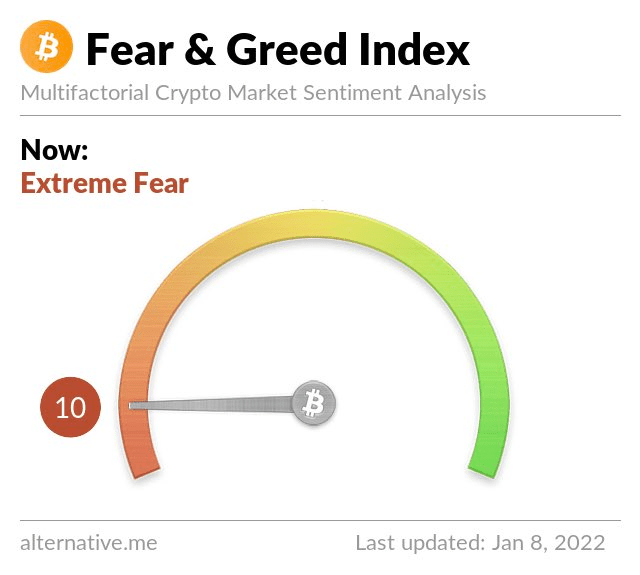 What a difference a year makes. At this point in 2021 the price of bitcoin had just breached a new all time high above $41,000 and was experiencing a slight price correction before going on a two-month run that would see prices pushed well above $60,000. As you can see from the pictures above, the sentiment around the bitcoin markets has shifted drastically year on year even though the price of bitcoin stands at roughly the same level. Many are fearful at the moment while they were experiencing euphoric emotions this time last year.

Human emotions are fascinating and extremely volatile. This is something your Uncle Marty is making an ongoing concerted effort to internalize because – once internalized – it forces one to zoom out and look at the bigger picture as opposed to getting caught in the chaotic noise of the moment. The chaotic noise produced by the price of bitcoin on any given day is a textbook example of something that can be extremely distracting. No matter what direction the price is moving in when it happens to be isolated by a headline. What individuals should be focusing on is fundamentals and the long-term trend.

Bitcoin is a distributed peer-to-peer cash system unlike any monetary system that has ever existed throughout the history of humanity. Its competitors are far inferior in regards to settlement time, openness, ease of use, and credibility of their monetary policy. Over the first thirteen years of its existence more and more individuals have come to recognize these fundamentals and the fact that they catapult Bitcoin into a different category when compared with others attempting to bring these use cases to market. That is why so much intellectual, financial and sweat capital has poured into the network to date and why even more will continue to pour in moving forward. Humanity is restructuring itself around a Truth machine in Bitcoin. This is where one’s focus should lie. Not on whether or not it is a good time to buy or sell bitcoin. That activity is for the distracted.

One should look at the differing scores on the fear index just 12-months apart and at the same exact price as a sign that the fundamentals are strong. $41,000 bitcoin has been so normalized that people don’t believe that it is “this low”. If you would have told 2016 Marty that people in early 2022 would be complaining about $41,000 bitcoin, he would spit out his coffee because he wouldn’t believe the price got that high that quickly. The fact that many are fearful at these levels is a sign of Bitcoin’s success and normalization within society.

Zoom out. Everything is working out beautifully.

Europe’s country Kosovo bans cryptocurrency and Bitcoin mining due to spiking energy prices and blackouts. Amid the crack-down against...

Global investment bank Goldman Sachs has predicted that the metaverse could be an $8 trillion opportunity. Several others have...

Is The Lightning Network Centralized?

Bitcoin custody provider Casa held its annual Keyfest conference this month, and with it came many conversations around Bitcoin...

On-chain data suggests there may have been a strong correlation between the Bitfinex Reserve and the Bitcoin price during...

The selloff in cryptocurrencies continued to start the week, with bitcoin falling to its lowest level since July. Ethereum...