The story focused on a quote by Abi Buddington of Dresden, whose house is near the plant and who was quoted as saying, “The lake is so warm you feel like you’re in a hot tub.” The story went on to blame the economics of bitcoin for bringing the plant online and effectively boiling the entire lake. There’s just one problem: The account and story are both largely false and embellished.

Before debunking the claims, it’s worth pointing out that the locals have legitimate concerns with how the Greenidge plant’s outflow pipe is discharging water into a canal that flows into Keuka Lake Outlet. Local environmental groups are monitoring the canal and water near the outlet. Greenidge and the local residents should, and will, deal with those concerns appropriately. However, activist journalists using overexaggeration and deceit on a global scale to increase clicks is not a decent way to bring attention to local activism.

It’s important to clarify that the plant’s activities are all within the limits set by its permits from the DEC and EPA, which determine how much water the plant can withdraw and discharge and at what temperatures, as well as the plant’s emissions limits. If there are any disputes about this, they are best handled through the appropriate channels.

Greenidge was built in 1937 as a coal plant. It was dormant from 2011 until May 2017, when Atlas Holdings converted it to natural gas. In 2019, the plant began pilot testing for bitcoin mining and launched mining services in January 2020. The new facility has a capacity of 22 megawatts (MW) in its first phase and up to 106 MW after completion of all phases. The plant sells electricity to the regional grid when it’s profitable to do so and uses bitcoin mining as a buyer of last resort when it’s not.

The fact of the matter is that it is not physically possible for the Greenidge plant to change the lake’s temperature as was reported by the media. This is easily proven with public data and simple math. The permit allows Greenidge to discharge 135 million gallons of water per day into the Keuka Outlet as hot as 108 degrees Fahrenheit in the summer and 86 degrees Fahrenheit in the winter. Let’s put that into context.

Seneca Lake is 38 miles long and contains 3.81 cubic miles of water, which is 4.2 trillion gallons, so 135 million gallons of discharge per day is 0.003% of the total lake’s volume. On that daily 0.003% of total volume, Greenidge has released data of “just a 6.8 degrees average difference between intake and outflow” between March and April in 2021. For context, this is the equivalent of removing 2.25 drops from a one gallon jug, warming those drops by about 7 degrees Fahrenheit, adding them back to the jug each day and then claiming that they are causing the jug to feel too warm.

This is the best that journalists can come up with these days to attack bitcoin. Literally convincing people to worry about a few drops in a bucket. The math shows that it simply isn’t possible for Greenidge to have a meaningful impact on the lake’s temperature. This is another case of careless reporting by the media when public data is widely available. It’s pure fear, uncertainty and doubt (FUD).

It has also been pointed out that state-of-the-art bitcoin miners use 3 kilowatts (KW). If the facility has 8,000 miners that’s equal to 24 MW of capacity. If all of that energy was somehow pumped into Seneca Lake for a year, with no loss, the temperature would only be raised by 1/300th of a degree.

Furthermore, Seneca’s two main inlets are Catharine Creek at the southern end and the Keuka Lake Outlet, where Greenidge is located. Seneca Lake discharges into the Seneca River/Cayuga-Seneca Canal. Seneca is also fed by underground cold springs and replenished at a rate of 328,000 gallons (1,240 m³) per minute. In other words, more cold water enters the lake in seven hours than the plant is permitted to discharge all day. These springs keep the water moving in a circular motion, giving it little chance to freeze over. “Because of Seneca Lake’s great depth its temperature remains a near-constant 39° F (4°C). In summer the top 10 to 15 feet (3.0 to 4.6 m) warms to 70–80 °F (21–27°C).”

What about independent hard data? First, it’s important to realize that Seneca Lake’s surface temperatures have been warming since the 1990s. Hobart and William Smith Colleges have a research buoy in the lake, which is approximately 9 miles north of Greenidge. The data is publicly available for anyone to peruse. Neither NBC News nor Ars Technica made any effort to source this data, but we can easily review it ourselves.

The average water temperature of the lake over the last 30 days is 67 degrees Fahrenheit. It is no hot tub.

And 2016 was also off the charts. This was while Greenidge was still dormant:

It’s not surprising to see that surface temperatures are correlated to air temperature. As we can see, 2016 and 2017 were significantly warmer years while 2018 and 2019 were cooler years. The lake surface was warmer half a decade ago and then cooled for at least two years while the plant was purportedly operational.

Some journalists have suggested that the plant is perhaps responsible for declining Seneca Lake trout populations — loosely evidenced by the dwindling catch during the National Lake Trout Derby held annually at the lake. In reality, nobody seriously believes the entire lake’s trout declines are due to the plant. The truth is that it is a complex problem that mainly involves invasive species.

Finally, here’s a thermal image of the lake. If the mining were actually a major factor in its warming, we’d expect to see red by the discharge area. Yet, there’s no evidence it’s a major source of heat. 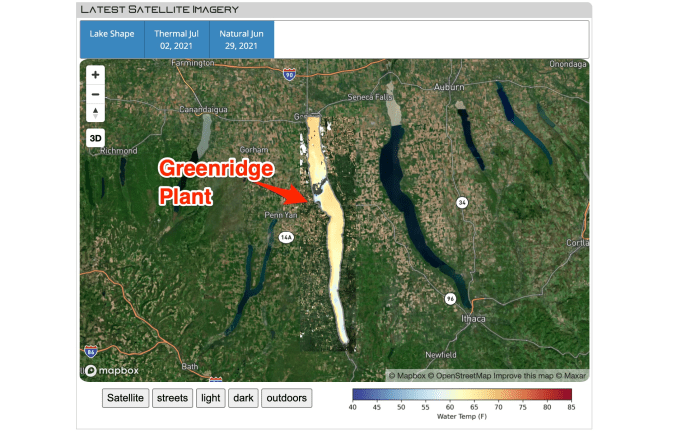 By now, it should be evident that the mainstream media pulled a fast one on everyone for clicks and to promote outrage — like some Orwellian propaganda machine. The story was also sensationalized by Tim De Chant of Ars Technica, which also went viral and was later corrected after the sensationalism was called out.

Speaking of persuading the masses to worry about drops in a bucket, the media has convinced people that bitcoin is terrible for the environment. However, on a global scale, bitcoin mining emissions are a drop in the bucket. As Cambridge University explains, at ~0.1% of annual global emissions, there’s virtually no evidence that bitcoin contributes to climate change, even under the worst-case scenarios.

To be clear, there are legitimate concerns by residents who live in the village of Dresden, New York. And local environmental groups are doing their best to hold Greenidge accountable, as they should. But, for the moment, they only have concerns. More research and observation is needed to see if those concerns are warranted.

Embellishing those concerns to spark outrage on a global scale is nothing more than a distraction from actual macro-environmental issues that need to be solved. Bitcoin’s carbon footprint is too insignificant and infinitesimal to warrant the attention it receives. The effects are intentionally overstated to provoke outrage. It would be just as pointless to enrage oneself over the impact of YouTube videos or gaming and believe something worthwhile is being solved.

If one truly cares about the environment, agonizing over 0.1% of annual global emissions, or a single outflow pipe in a tiny village, is both a diversion and a colossal waste of everyone’s time.

This is a guest post by Level 39. Opinions expressed are entirely their own and do not necessarily reflect those of BTC, Inc. or Bitcoin Magazine.

Ripio, a Latin American (Latam) exchange headquartered in Argentina, raised $50 million in its latest funding round, led by...