JPMorgan: Bitcoin’s Record Run Is Being Driven By Inflation

Concerns that inflation will keep rising and not be transitory is the main driver for the Bitcoin price pushing to new highs — not the first U.S. bitcoin futures exchange-traded fund (ETF) — JPMorgan strategists said, according to a Bloomberg report.

“By itself, the launch of BITO is unlikely to trigger a new phase of significantly more fresh capital entering Bitcoin,” wrote strategists, per the report, referring to the ProShares Bitcoin Strategy ETF. “Instead, we believe the perception of Bitcoin as a better inflation hedge than gold is the main reason for the current upswing, triggering a shift away from gold ETFs into Bitcoin funds since September.”

As inflation rates have not declined despite the Federal Reserve’s multiple remarks that it will be “transitory,” investors have sought investment vehicles to protect their purchasing power. Gold has failed to act as such in recent months, contrary to Bitcoin, which has seen significant USD gains.

In three months, gold has decreased in value, while bitcoin has more than doubled. Source: TradingView.

Institutional and professional investors are rebalancing their portfolios, cutting out losers, and hopping on the fastest horse. As a result, “the shift away from gold ETFs into Bitcoin funds has gathered pace,” per the report. 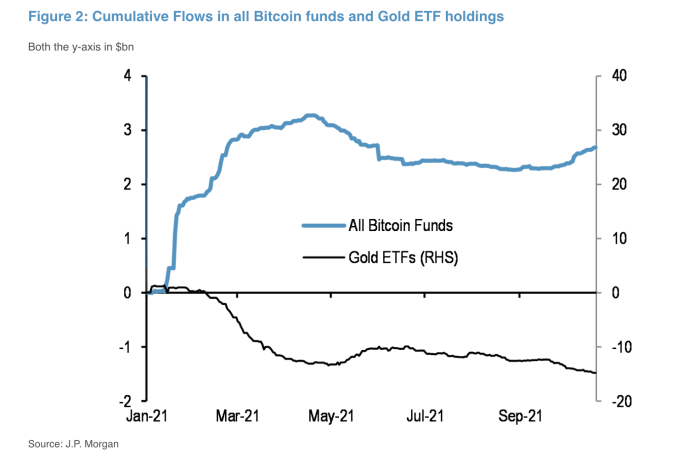 Worried about inflation, investors are moving away from gold and into bitcoin. Source: Bloomberg.

“This flow shift remains intact supporting a bullish outlook for Bitcoin into year-end,” the strategists said.

Bitcoin surpassed its previous all-time high yesterday, climbing north of $66,000 for the first time amid the launch of the first BTC-linked ETF in the United States.

The ProShares Bitcoin Strategy ETF (BITO), which seeks bitcoin exposure through futures contracts, launched on Tuesday and became the second-biggest ETF debut in U.S. history in terms of trading volume. BITO traded even more volume on its second day to become the fastest ETF ever to reach $1 billion in AUM at market close yesterday.

press release PRESS RELEASE. EverRise, the DeFi project that introduced the concept of buybacks in cryptocurrency, is going live...

Invesco has launched a bitcoin exchange-traded product in Europe.The Invesco Physical Bitcoin fund is listed on the Deutsche Boerse...

The Indian government has answered three sets of questions in parliament regarding bitcoin transactions, the high-profile bitcoin scam in...

Part three in the “Bitcoin: The Big Bang To End All Cycles” series.Today, we will observe Bitcoin through the...

Bitcoin mining companies are now increasingly experimenting with immersion cooling, a form of cooling that allows them to get...