Bitcoin was down about 4% over the past 24 hours along with equities on Wednesday. The intraday sell-off occurred after the U.S. Federal Reserve pointed to a possible interest rate hike in March, which is sooner than many had expected.

But despite the price dip, some analysts expect BTC will stabilize in a range of between $40,000 and $50,000, which could keep volatility low.

Others are looking to alternative cryptocurrencies (altcoins) such as ETH, LINK, ICP, FTM that have outperformed BTC over the past week.

For example, some decentralized finance (DeFi) tokens that fell out of favor in early 2021 still managed to retain some top spots in terms of total value locked, which represents the number of assets that are staked in a protocol.

“Perhaps as they are considered more battle-tested and a safer store of capital compared to newer competitors,” Delphi Digital wrote in a blog post.

For now, even with altcoins in the spotlight, volatility has declined in both BTC and ETH recently.

“Our view is that this volatility compression is structural and will be a theme for 2022,” crypto trading firm QCP Capital wrote in a Telegram announcement. “With that said, we think this dip in the front-end [of the volatility curve] is overextended and we’re adding long gamma here.”

Traders are “long gamma profit” when the underlying asset moves more than expected.

Typically, during periods of market panic, some traders would sell altcoins, which are deemed to be risky. The remaining option for traders is to seek relative safety in BTC, which results in a higher bitcoin dominance ratio.

This time, however, altcoins continue to outperform bitcoin, which suggests investor appetite for risk remains strong.

Some analysts refer to the battle for crypto’s top crown as “The Flippening.” Over the past year, ether has gained ground versus bitcoin across several metrics, including active addresses, Google search interest and transaction counts. 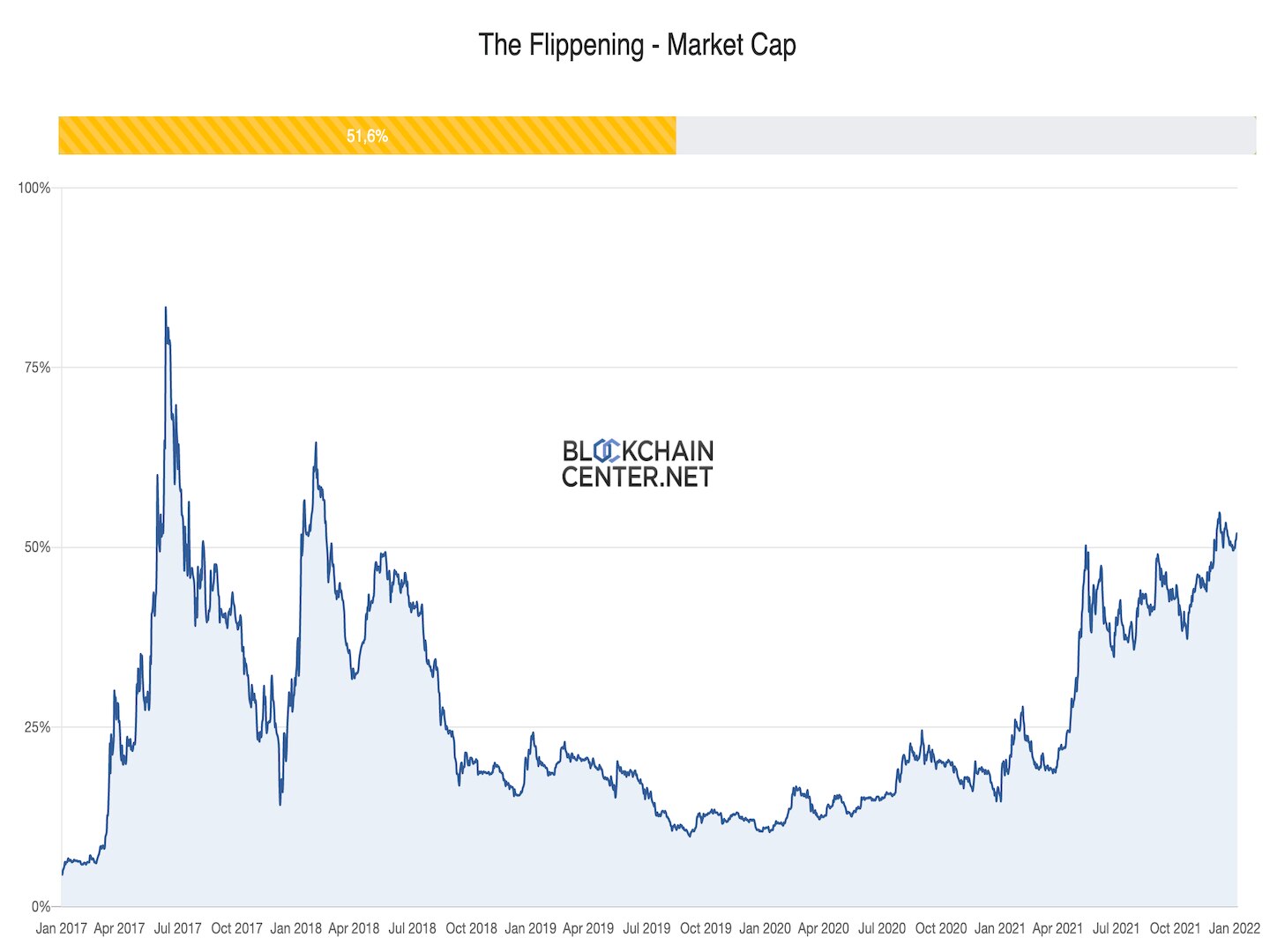 The rise in ether’s market capitalization suggests investors are looking for potential opportunities for return beyond bitcoin.

“There are hard dates and a hard outline from the Ethereum Foundation to increase the network throughput and lower transaction fees,” Katie Talati, head of research for crypto and blockchain asset management firm Arca, said during an interview on CoinDesk’s “First Mover” show.

Ethereum’s network improvements could be a catalyst to attract more funds to ether versus bitcoin, according to Talati.

The state of Ethereum’s fee market: CoinDesk’s Edward Oosterbaan examined the motivation for EIP 1559 and if after four months, there are any real impacts on the Ethereum blockchain. So far, Coinbase noted it is saving 27 ETH per day from base-fee refunds and faster transaction confirmations by 11 seconds compared with before the London hard fork. On the opposing side, Galaxy Digital’s look into EIP 1559 reported issues due to increased block size (gas limits).Chainlink (LINK) jumps, outperforming bitcoin: LINK led gains among major cryptocurrencies over the past two days as the broader market showed signs of a recovery. LINK is used to pay for price feeds and other services on Chainlink and has a market capitalization of $12 billion, CoinGecko data show. The price, however, is down 50% from its record of $52 last May.Algorand enters the metaverse: The Drone Racing League (DRL) and Web 3 game developer Playground Labs have tapped Algorand’s blockchain to create the first play-to-earn drone game in the metaverse, the league announced on Wednesday. While the details are still to be worked out, the league said “players will race DRL drones” (presumably digital ones) for cryptocurrency and non-fungible tokens on Algorand. Read more here.

Most digital assets in the CoinDesk 20 ended the day lower.

Non-fungible tokens (NFTs) marketplace OpenSea launched a new listing manager, among other measures, to mitigate a user interface flaw that...

Bitcoin miner CleanSpark doubled its computing power over the past three months to reach 2 exahash per second (EH/s), joining...

The $15 million in ether (4,600 ETH) stolen from Singapore-based Crypto.com is currently being '"mixed," or moved to obscure destinations...

Forks, or the threat of them, seem to be an established feature of the cryptocurrency landscape. But what are they?...