The below is an excerpt from a recent edition of the Deep Dive, Bitcoin Magazine’s premium markets newsletter. To be among the first to receive these insights and other on-chain bitcoin market analysis straight to your inbox, subscribe now.

U.S. Treasury Secretary Janet Yellen: “We can’t tolerate any chance of defaulting on the government debt, and there is a lot of uncertainty.”

Consider this a signpost. This statement by Yellen, while assumed by most investors, is just another “sign of the times.”

For those who are not yet aware, we are living through the first bursting global sovereign debt bubble in 100 years and the first currency system shift in 50 years.

Sovereign debt bubble? Currency system shift? Yes, you heard that right. When Janet Yellen, former chair of the Federal Reserve and incumbent U.S. Treasury Secretary states that the U.S. will not be allowed to default on its debt obligations, she is right.

The federal government will not explicitly default on its debt, instead it will implicitly default, which is in fact exactly what is happening today.

What exactly is the difference between an implicit and explicit default, you ask? While the history of government defaults is quite nuanced, we will briefly examine two examples of sovereign default, both of which occurred in the United States over the last century, to provide context.

The 1920s were known as “the “roaring twenties,” and for good reason. Following the conclusion of World War I, U.S. productivity soared as inventions and technological advances such as the mass production of the radio and automobile brought about the most prosperous times in all of recorded history.

Not only was technological advancement occurring, but the stock market absolutely soared, bringing about wild enthusiasm as everyday people grew wealthy as the Dow Jones Industrial Average (DJIA) nearly grew by nearly a factor of five, from 1920 to 1929.

However, the booming stock market was not a result of a “new paradigm” of productivity or financial markets like many believed at the time, but rather was mostly due to unchecked credit expansion which created a massive asset bubble.

During the later years of the 1920s, many individuals and entities would borrow solely to invest in the stock market that seemed to only go up.

However, like all credit-fueled asset bubbles, there was eventually a bust, and what followed was among the most notorious financial market collapses ever. The DJIA collapsed by 85% in a little less than three years, as the virtuous cycle of a credit boom worked in reverse.

However, at this period in time, the dollar was pegged in value to gold, which limited the Fed’s ability to ease, as any easing of the money supply would have had to be backed by additional gold reserves. Thus, all of the credit extension and fractionally reserved “money” in circulation collapsed back onto the gold peg as the malinvestment attempted to liquidate itself from the system.

“Typically, governments with gold-, commodity-, or foreign-currency-pegged money systems are forced to have tighter monetary policies to protect the value of their currency than governments with fiat monetary systems.

But eventually the debt contractions become so painful that they relent, break the link, and print (i.e., either they abandon these systems or change the amount/pricing of the commodity that they will exchange for a unit of money).

For example, when the value of the dollar (and therefore the amount of money) was tied to gold during the Great Depression, suspending the promise to convert dollars into gold so that the currency could be devalued and more money created was key to creating the bottoms in the stock and commodity markets and the economy.

Printing money, making asset purchases, and providing guarantees were much easier to do in the 2008 financial crisis, as they didn’t require a legalized and official change in the currency regime.”

Gold has historically not only serves as a hedge against monetary inflation during a credit boom, but also during the deflationary bust that follows and the accompanying counterparty risk that comes with it. 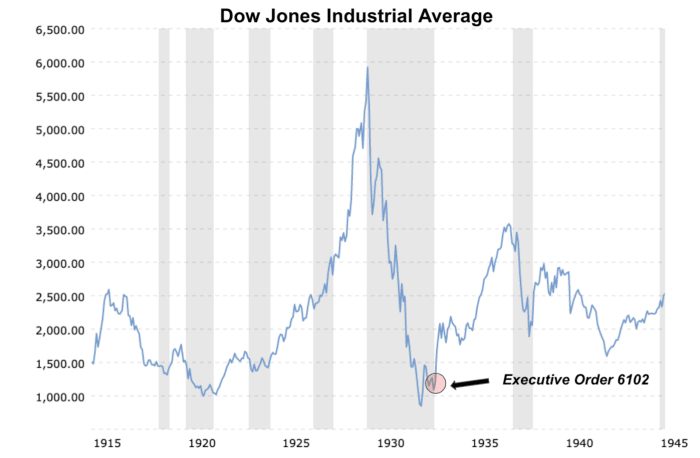 In 1933, President Roosevelt issued executive order 6102, which mandated that all privately-owned gold be handed over to the government. Shortly after, in 1934, Roosevelt revalued the gold peg from $20.67 per troy ounce to $35 per troy ounce. The stated reason for the order was that “hard times had caused hoarding of gold, stalling economic growth and worsened the depression.”

The reality was that this was no fault of “greedy gold hoarders.” This was an explicit default. The U.S. dollar, which was pegged to a known amount of gold, was no longer redeemable at the conversion rate, and U.S. citizens were the ones burdened with the devaluation. There was not enough gold in reserves to redeem all of the claims in circulation. This was a direct result of fractional reserve banking.

Reports show a vast majority of the American populace has been worried about rising inflation and as the weeks...

The Binance Smart Chain has launched a $10 million bug bounty fund for projects building on top of the...

The Intelligent Person’s Guide To Bitcoin

The below is a response to professor Fabrizio Carmignani’s interview, titled “Dummy’s Guide To Crypto,” which I found was...

Kubernetes Clusters Used to Mine Monero by Attackers – Bitcoin News

Attackers are abusing an attack vector present in one of the most popular execution engines (Argo Workflows) to repurpose...